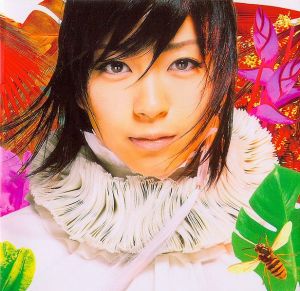 This is definitly another magical track added to her discography.  I mean this also was part of the Kiriya trilogy and was a beautiful PV.  I know this is a lot of people’s favorite song, but her voice was so thin in some parts.  I love the breathing in the bridge, that was awesome.  It’s definitly a strong A-side but I put it after “FINAL DISTANCE” and “traveling”.

Letters was just an unusual track as an A-side.  There’s some pretty nice drum playing and a pretty cool melody.  I actually like this track more than “SAKURA Drops” and I blame it on the acoustic guitar.  I mean it’s smooth just like the other A-side but there’s less thin notes.  Very cool track.

I thought this was a balanced single.  Both are very high quality A-sides and both made it on the Single Collection even though Letters didn’t have a PV…Anyway both songs are dreamy in their own perspective and made an awesome final single to the era

For as long as I’ve paid attention to H!P stuff.  This came as a strange track for me.  I mean it sounds almost Russian in sound because of the loud percussion and the bagpipes included.  It’s just comes as just a bit strange for me for some reason.  Koharu is amazingly cute in this song which is normal since she’s like that in Morning Musume the other two.  Sayaka and Yuu being from Hello Pro Egg they sound just as girlish and cute, if not more.

I actually found this song more enjoyable.  All 3 girls have solo lines and they sounds pretty strong for being H!P girls.  It’s got some twinges of rock and pop at the same time.  The chorus sounds a bit repetitive but it still sounds pretty good on the other hand.  I actually prefer this to “Anataboshi”.

This debut track for this mix of HPE and MM was pretty good overall.  There’s still some kinks they need to work out but they sound pretty good altogether.  Anataboshi was a pretty unusual track being different from the norm while Sansan GOGO was the more obvious track.