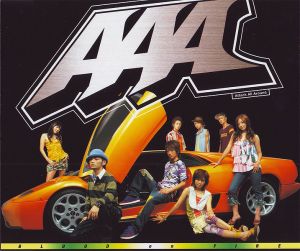 Initial D….what’s that mean to me?  Well, it means blood-boiling adrenaline rushes and high-speed races.  The music should also be this dynamic and well-made.  Does AAA do this right?  OH HELL FRIGGIN YES!  AAA’s debut track is the driving force for the movie “Initial D” and it so did its job.  Like all of the other tracks used for the series (Looks at m.o.v.e’s discography)  This one in particular was definitly an easy fit.  Takahiro doing most of the vocals, Misako leading the gals, and Mitsuhiro doing the rapping it kind of works in a lot of sense.  Though I wished the other members had more time in the song mostly the other girls since Urata did sing a line or two in conjuction with Takahiro.  Their energy is phenominal almost and the chorus really proved to be the best area of the song as they say ~Your blood’s on fire!!!!~ Hot!

This couldn’t have been a better way to start off their career.  I still don’t think any of their other songs come close to the awesomeness that is this track.  Maybe if there was a B-side perhaps, but who cares this single wins IMO

One Response to “AAA – BLOOD on FIRE”