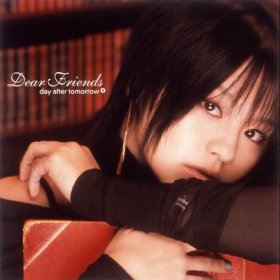 I’m hearing jingle bells again…I really don’t like where it was going until the tempo sped up instantly in the chorus and then slowed down again when the verses started.  The guitar riffs reminded me of their other track “Soshite Boku ni Dekiru Koto” and some of GND’s stuff.  I still like the other than that.  Definitly wasn’t a song I was expecting from the title.

I would’ve thought that this’d be the ballad, but I was wrong once again.  It’s more of the same pop/rock found in the song.  misono sounds a little nasally, but it’s usual. There’s less going on and a bit more simplistic in arrangement, but still a good song from GND….I mean dat. xD

I wish misono resang this because it’s just awkward having no changes in vocals but add strings.  Even then it isn’t a full orchestra version because there’s still guitar.  No synths though, just those two things and drums.  That’s not really a full change.  Even then, I’m still not fully into “Starry Heavens”.  I do love the guitar solo with the strings, however.

dat….where’s our album?  This double A-side was definitly the upbeat one and the one that really is similar to GND’s stuff which I blame the keyboardist for making it all sound the same.  Anyway without the assumption, this is a good single overall