Filed under: Ayumi Hamasaki — solarblade @ 9:57 am

As much as I loved “Trust” and “YOU”, For my dear…has got to be one of Ayu’s worst A-sides of the entire era.  I mean her voice was just terribly off and the acoustic guitar forward of the song just took me outta the song really quick.  The song does sound pretty melancholic and dark, but Ayu pleasssse get better after this lol  (rolling sarcasm).  Nah, not a good track.

2. For My Dear… (acoustic version)

Even the acoustic version couldn’t save the song from being mediocre at best.  It kept the vocal issues that were profound in the original mix, but replaced the guitar and band with piano and xylophone.  Actually this version showed more of Ayu’s vulnerabilites than any of the past acoustic version…Worst way to showcase it Ayu!  The only thing I can say that was good was the xylophone solo near the end…that was nice

Ayu’s 4th single is the worst one of the era hands down.  The song did not do Ayu justice at all and her vocal ability went down hardcore with the track…If it helps, it’s the only A-side of the first four eras to not have gotten a remix of any sort (strange as it seems).

All I knew was how epic this song really took Momoi.  Combining a bajillion different synth sounds and keytar really makes for a good dance track.  Momoi’s vocals are bearable because it’s not as seiyuu-y as it normally is and she carries a good amount of energy.  I don’t know why, but I really like this track and it’s just as good as “Sunday early Morning” which is fortunate.  Great song!

Chuo Line is quite different from Lumica as it has little to no synths in the song.  There’s an actual band performing.  Hearing this drop off shocked me good because I didn’t think Momoi could pull this off as well as she did.  Her vocals are a bit better here as well which made the song a better listen.  Think of something Shion Tsuji or YUI would pull.  Different genre altogether IMO

Momoi’s final single for the “Sunday early Morning” era was wowzers.  I didn’t think she’d pull it off as well as she did.  Looking at the other singles of the era, none could match the epicness of this one single.  Lumica was electronic heaven while Chuo Line was more of a throwback as a band member before going solo. *RECOMMENDED*

That thumping beat is so reminescent of Nami’s recent track, “Kanojo” it’s quite freaky.  Well we kind of go back to a normality with Namie with this A-side.  Nothing fancy or anything that’ll be odd.  As much as I like the last A-side this was pretty well done.  Namie sounds lively in the track and the beats are simple and easy on the ears for me.  I like the song alot actually.

Wait….looking at the song…Nobody was supposed to be the B-side to White Light/Violet Sauce….but then again…Nobody is basically White Light with some R&B beats added on to make it more “original”.  Terrible idea right from the start to recycle the song again…I mean the lyrics are different don’t get me wrong, but with the chorus and the musical arrangement being same-y, I just didn’t care for it this time around and became stale.  Probably the worst B-side of the era.

Baby Don’t Cry finally gave us a plain R&B track with no surprises.  I thought that was nice for the era to calm us down and just listen to the track.  I do however blame Nobody for bringing the single down heavily.  Recycling your own track to this level was a poor idea and it was a poor song.  UGH!

I think she’s doing better on releasing A-sides since Trust is definitly a ballad I would listen to except for the obvious fact that she couldn’t keep in tune for the life of her.  If she resang this track I know it would loads better because I really do like the track.  Pretty good track overall, but with questionable vocals.

Just like how “YOU” was changed into an acoustic version, Trust also got the magical touch and honestly I thought this was another one of those tracks that sounded even better than the original.  It might be the production value, but Ayu also sounds a bit more better here as well.  Damn, she can make acoustic tracks sound so damn good hahahahaa.

Ayu finally found a track that I do enjoy with Trust.  I do prefer the acoustic version over the orignal.  Not to say the original mix was bad or anything, both were pretty good.  A lot more stable than “YOU”

Man, what an epic song come together.  Forget the fact that “FLY ME SO HIGH” brought them a new sense of style with synths.  T.Kimura brought the awesomeness with their next single.  motsu is very fierce with his rapping skills and showed a lot of enthusiasm.  Yuri also brought some game and I think she’s sounded the best in the era with the song, but the props really go to T.Kimura for bringing such a hardcore trance style abroad and it sounded just right.  Why aren’t they back to this style eh?

Our first B-side is so long at 8 minutes, I was wondering what Kimura had up his sleeves for this long track.  At first I was like I really like the tribal thing going on with the synths and pounding drums.  It doesn’t take to long for yuri to come in with the vocals, but I felt the music was louder than her lot of the times, but she carried some awesome tones.  motsu is pretty angry sounding as well as we continue on with the track.  If there was a track to calm down after the crazyness of “come together”, blue jewel definitly gets it down, but it’s a bit long still.

Jeeze, this single is sooo damn long.  1969 is also a long track going over 7 minutes.  Instead of the laidback house stylings of “blue jewel” We actually get some eurobeat back into their veins and it sounds so much more original and futuristic than their past endeavors.  Unlike the last two, it takes a while before we see lyrics happening.  When it does Yuri sounds ethereal this time around while motsu is the backup again.  I don’t know what’s special about the song being called 1969 because they say it a LOT!

Oh hay!  What do we have here an original?  Well, last time I saw that tagged on one of their songs it made the song so much worse which was “destiny”.  Now the first thing I notice is the GODAWFUL length of the song which bypasses all of the other tracks when a time clocking in at past 11 minutes.  What the hell could this mean?  Well what the hell it’s an extended version that took the meaning to literal.  Instead of immediatly starting with yuri’s part the song eases its way in and then becomes just like the original.  Now past that I was expecting more of the instrumental parts but they surprised me by adding another verse, chorus, and after chorus to the song.  OMFG it went from sweet to FUCKING AMAZING, figuring out this.  Honestly, the length doesn’t matter since this is my all-time favorite m.o.v.e song.

m.o.v.e totally upped their status with me when this came out.  I was uncertain where things were going with “FLY ME SO HIGH” but releasing this behemoth of a single no doubtedly shot them higher with the fans with such a raw trance sound.  blue jewel was great being the opposite mood for come together and seeing that it was shortened for the album makes me wonder what it’ll be like. 1969 also gets on the album without changes so that’s good enough for me.  Now what got me in a twist was the decision to put the RADIO EDIT instead of the ORIGINAL on the album but it was necessary for space for the other tracks.  meh, anyway BEST *RECOMMENDED* 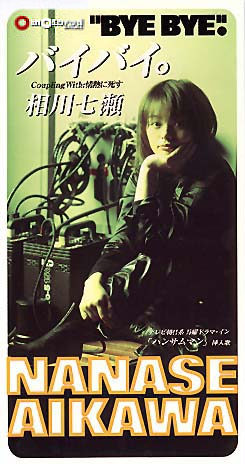 This song sounds so funny when BYE BYE! starts out with a cowbell which luckily fades away when the guitars come in.  Nanase is kind of singing pretty fast with this song and this song actually sounds western…it could be the how the chords are working.  Just like her debut, Nanase’s vocals are pretty questionable as it’s very nasal and kind of a pain.

Jounetsu no Shisu begins with a police siren wailing out before the guitars and what seems to be a sitar pops in.  Things look better with this song as it does sound so different and pretty exotic as Nanase songs go.  Nanase doesn’t sound much better, but it’s passable for right now.

Nanase’s 2nd single to me was a bit of a disappointment.  BYE BYE! wasn’t exactly a catchy track to begin with and her voice was just not fitting to the song.  Same thing with Jounetsu no Shisu, but the songs was a better presentation to me.