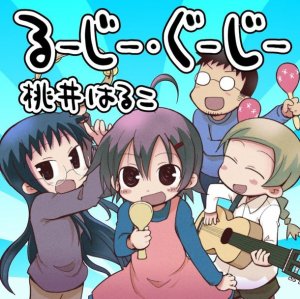 Loosey Goosey is definitly something different featuring a different side of Momoi…a more seiyuu-like Momoi.  Luckily the music isn’t entirely sugar-coated and it’s actually quite cute if you listen to it enough.  There’s a mix of acoustic guitar and cutesy played woodwinds, and it fits with its tie-in as it’s pretty laid-back and calm.  Despite Momoi’s saddening vocals, it’s not a bad track.

Then we get the B-side and it’s very seiyuu-typical of Momoi.  It’s just a flurry of synths and ear-piercing vocals from poor Momoi.  I’ll agree that it’s so much more energetic than normal, but this just doesn’t sound vocally special.  I guess I’ll have to warm up to it.

Momoi started up her own label which isn’t a surprise to many, but after “Sunday early Morning”, I was expecting her to have stayed longer.  Her first single is different from her last single “Lumica” as it isn’t as J-tek as I liked to be, but being so laidback, Loosey Goosey was nice.  Brand New Music was more energetic, but at the cost of good vocals.  I’m sure she’ll do better next release.