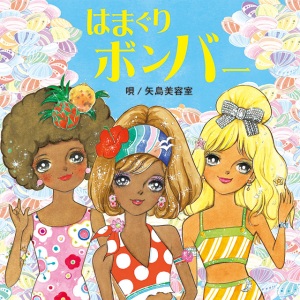 Unlike the surprising sound of their last single “SAKURA”.  Hamaguri Bomber is actually a nice summer track with some latin flavor going on.  I love how this is actually quite cool and I love the chorus to the song because there like ~BOMBAAAAAAA~.  It’s explosive and fun and OZMA, Takaaki, and Noritake sound just as funny still.  There’s even a guitar solo thrown in there for the kicks.

I wonder if an album is nearby since this is the 3rd single in the era and they show no signs of weakening from them since this song shows of more of their vibrant stylings…and even though they aren’t supposed to be taken seriously, the music is otherwise pretty strong.  Hamaguri Bomber is like going to another one of those tracks that’ll get stuck in my head for weeks to come since “SAKURA” is still is.  Another good single from the 3 guys/girls/whatever?!?