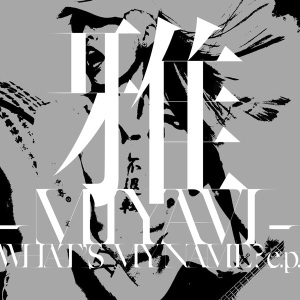 Beginning this recut single is the original song from MIYAVI’s most recently released album.  WHAT’S MY NAME? wasn’t one of the more memorable songs from the album, but it’s was a pretty interesting song since it did showcased what that album was about and it was MIYAVI raw and unplugged.  The last time I’ve seen this kind of raw side was “Are you ready to ROCK?” and that was an impressive song, but this kind of is under it…but it’s different and I really do love his guitar playing.  Lyrics could’ve had more, but whatever, I mean yelling ~WHAT’S MY NAME?~ does get bothersome at the end lol.

I do recognize ZAZEN BOYS…but from where I do not know.  As the rest of the single is the song I guess played differently through other guitarists, the first is kind of a surprise since the sound of it is sound different.  The guitar is a lot more lower and darker like iono.  Besides that, it’s the same playing just a rougher undertone.

To be honest, it was tough to find the big differences between this version of the song and the original which is a little strange, but there must be a reason for Hama Okamoto being in the song.  To be honest…I wonder if he was also doing guitar parts…either way…kind of the meh here.

So I do know here, Hinata is the bassist from Straightener and it’s clearly he had fun playing the melody of the song and actually totally made the song a whole lot more exciting than any of the other versions.  Though once again…what was the point for this?

Probably one of the more stranger recut singles I’ve come across, WHAT’S MY NAME? didn’t really need the small changes like the ones found on here…maybe a lil more oomph could’ve helped out…but still this is kind of useless and maybe not worth the money to be honest.