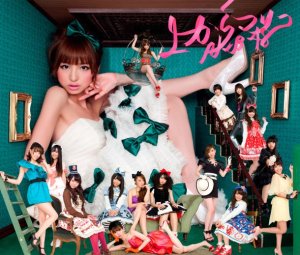 Seeing as the song is essentially for Mariko Shinoda (you know…the big girl on the cover) I was curious to what it’d be like but I’m just kind of disappointed.  I mean it does sound different from what they’ve done in the past which is good and the upbeat feel is nice as well, but it doesn’t have this stuck-on-your-mind effect which their songs usually have.  I don’t know, but I think AKB is slightly loosing their touch in their music…meh winter A-side if you ask me.

Which is weird they made the actual winter song a B-side on the single.  I already have a better time listening to this tune since it’s got a pretty arrangement and whoever sings first in the song sounds rather good here.  It’s simple as well since it’s acoustic guitar, strings, and the usual christmas-y stuff.  Simple but effective of a song.

The 4 teams get their own song luckily for the split editions and it’s weird that for the most part surpass the A/B-side.  Team A’s Rinjin wa Kizutsukanai is pretty damn mysterious of a song which is awesome and they sound good together with this whole dark arrangement of a song.  It kind of reminds me of last year’s “Kurumi to Dialogue” but without the dance beats.  I kind of liked the mood of this song…great!

Wow, seriously they’re giving the smaller teams much better songs it seems.  Zero-Sum Taiyou has a euro-dance style for its arrangement and I consider Team B to have the best vocalists in it.  It’s pretty danceable and since there’s no solos to be found it made it an easy song to listen to harmonies and they got it right for the most part.  Not as cool as “Rinjin wa Kizutsukanai” but is probably the second best from the single.

I think Team B gets the crap songs but I don’t know why it has to be them, yes they do have the cuter vocals and some of the girls can’t melodically sing together but it doesn’t mean they need to have cutesy songs like this and their previous “Love Jump”.  At least the chorus is actually the tune’s strongest point since I remember this more than “Uekara Mariko”.

Team 4 finally gets their own track with Hashire! Penguin but just like “Yobisute Fantasy” it kind of rides the cuter vibes and has a good chorus but I’m liking this a little less since it sounds like a lot of things they’ve done before…like it’s something that should be on “Koko ni Ita Koto”.

At least AKB48 finishes 2011 on a rather on alright note but not because of its A-side.  Noel no Yoru, Rinjin wa Kizutsukanai, and Zero-Sum Taiyou were the great songs off the single and c’mon it’s because it doesn’t sound like anything they’ve done a lot in the past.  The other three songs to me feel like what I’ve gotten to expect from Atsushi’s producers which is starting to wear thin on me.  Let SKE48 and the other ___48 groups take the not-so-memorable arrangements. 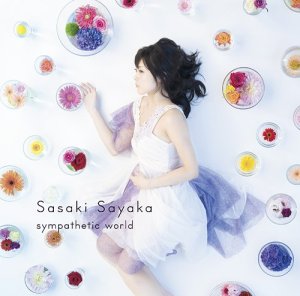 I’m surprised she’d kick things off with such a rockin’ track in sympathetic world.  She hasn’t done anything like this since her debut single so it’s great to see this back since she has a great voice for this style of music.  She powers through the song in such a strong tone and style that it makes me want to repeat it over and over again.  What a great way to begin the album I say!

Great to see her second A-side (the primary one) appear after “sympathetic world” but it might surprise first listeners who haven’t heard this song.  Unlike the opening track, Lucky☆Racer has a more explosive synth background here but we have the same conclusion that she definitely accels in the more powerful sounding songs because I loved this song when it was first released.  Very fast-paced and energetic here.  It’s definitely my favorite of all the A-sides she released.

It’s pretty interesting that she added all the B-sides from the four singles representing the album (“Starting Again” is omitted) except “Gakkou Gakkou LIFE!!”.  I barely remember this song since it was off her debut single so that’s not good!  From the single it seemed like I liked it a lot actually.  However, it does seem to be less powerful than the previous two songs but I’m surprised this wasn’t placed after “sympathetic world” since they fit together one after another.  It’s quite good still but not as well as like I said compared to the previous two.

Our next new song appears next and I’m surprised she’s keeping up with such a strong line of songs so far.  I felt that out of the four so far, this has the most anime-ish feel to it since it has the formula of one.  You know, guitars and strings.  I’m also continuing to enjoy Sayaka’s vocals since she hasn’t let up on the punch and timber of her voice…still powerful here!

Then we get into Sayaka’s debut A-side and still definitely is unique (then again all the A-sides she released were unique in ways).  It has been a while since I’ve heard this last and still is her darkest song in her discography not surprisingly.  It does have the animu sound like “universal sky” but isn’t as strong or vocally together like that song so this is pretty much a worse version of that.  It’s alright, but nothing epic.

I’m starting to want change on the album and Heaven’s gate tries to pull a little unique sound out by being just purely rockin’ like “sympathetic world”.  I will say her voice sounds a little odd with the slight filters and such but she still retains that power in her voice.  Otherwise, I don’t remember this song very much.

As the B-side from “fly away t.p.s”, snow ring is quite fitting for the season since it does have that wintry feel and such.  Also it’s the first rather slowish song on the album which is nice but because of that, I get bored very quickly with this song.  I wish there was something a little more memorable about this tune but I can’t really find one haha.

Slowing things down further is Koi Hana and to me this song starts up a different side to the album which is the more cuter side to Sayaka.  I’m liking the simplicity of the ballad with mostly strings and piano but adding more oomph in the chorus.  I will say that I’ve been on the fence with Sayaka’s higher pitched cute vocals but this was alright.  A couple of minor flaws in tone actually.  Not the best new track of this album.

The next three songs were previously released stuffs starting with Sayaka’s 3rd A-side released!  Kind of like “Lucky☆Racer”, this track is a bit more synth-based along with a lot of punch.  I must say though that this song is probably my second favorite best from the A-sides.  I’m loving Sayaka’s vocals a lot since they’re deep and kind of remind me of Nami Tamaki’s vocals.  Great song!

I guess I could say the same about Zzz as well since it’s just as cutesy and totally out of character for Sayaka this late on the album.  The music is a lot lighter than “Real Star☆” which sounds great, but the song is definitely not her once again and this was an A-side is quite embarassing.  I think this and the previous song are the worst on the album.

Closing the album is something that continues to have this cute sound but is more danceable than the previous two tracks.  I kind of wish she sung the song in her deeper tone but I’m already liking this song a bit more than “Zzz” and “Real Star☆”.  The arrangement kind of reminds me of either an H!P song or a Q;indivi/DAISHI DANCE thing but really isn’t since Lantis has songs that are like this.  Maybe a little girl next door?  Ehhh it’s alright but strange as a final song.

I didn’t expect Sayaka to have a bonus disc at all with her debut but seeing as it’s covers for the most part interested me a bit.  I can’t remember if I ever reviewed Chihiro Yonekura’s song with other artists that reviewed it but the melody doesn’t seem familiar.  It seems to have a similar GUNDAM sound (then again the original was tied to the series).  Like most of the older GUNDAM themes, it still sounds rather dated to me but Sayaka sounds good through it.  It’s an alright cover.

Now this cover sounds really familiar (then again I’m so used to AKIKO’s original and m.o.v.e’s cover of it).  Sadly, this version of the song is super awkward and suckish to listen to.  I mean it took out all of the good points of the song (the strong arrangement) and replaces it with piano, strings, and acoustic guitar.  I don’t really like Sayaka’s voice either in the cover either (cept for the quieter parts).  It’s just a diet-coke of the original…leaves a nasty taste afterwards.

It’s pretty rare to see someone covering an artist’s B-side but here we are with one where the original actually came from Hironobu Kageyama.  It doesn’t seem to sound as dated as “Arashi no Naka de Kagayaite” but it’s strange because both Hironobu and Sayaka sing together at various points though she’s the main singer which is great.  It’s a solid cover and is the best of the three tracks on the bonus disc.

It’s funny that Sayaka released her debut album before HIMEKA (and the latter has been performing a year before her!).  sympathetic world overall is a great album if you can get past the final three tracks which were oddly enough the cutesy songs which doesn’t work for her well.  I think if she does either energetic synth songs and/or rock songs she’ll do fine on her second era (which might have started with “Starting Again”).