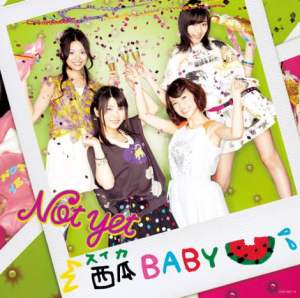 Not yet gets onto releasing this song which is kind of a punch to people since their last release, “Perapera Perao” was clearly a summer tune and we’re given another to deal with x.x  I mean it’s a bit louder than you would expect it to be but it’s still just really another Aki.P summer song and I’m just kind of tired of it to be honest…is there really a way to really tell them apart? XD.  At least it’s just the four ladies performing the song.

Moving onto the B-side on all versions, Kibou no Hana is a lot lighter than “Suika BABY” was and that’s nice but this is Not yet we’re talking about and this song doesn’t really identify as being something different which isn’t a surprise since it’s been a problem since they’ve debuted.  I guess the longing and sentimental feel of the song is nice and the girls aren’t hitting sour notes that I can hear of but it’s just nothing special.

I can see they were trying with Fumuona Yoru because the song has a different feel to it but still very Not yet-ish of them to release which is great to hear!  There’s still a lack of emotion in my opinion so they song kind of just drags a little bit for me but at least it’s something a little more memorable than the previous two tracks…Just not my thing to listen to to be honest!

Written by Rie Kitahara, guilty love is kind of interesting to listen to actually.  It’s more engaging and has a different kind of feel (like a little anime-like).  Plus the four ladies are able to show more of their vocals with less music fueling them from behind which is nice.  It’s not too much different than “Fumaona Yoru” but this sounds better and I’m enjoying listening to the ladies a lot more than in said song before as well.

Our next song, May, is a solo track for Yui Yokohama and doesn’t surprise me it’s one of the lighter tracks on the single.  Yui’s vocals are a bit more cutesy but she can hold her own in pitch which is a nice thing to have but May is kind of underwhelming for some reason.  It’s like it’s trying to decide if it’s a pop track or enka/kayoukyoku.  It just throws me off with the low brass and then flutes…kind of throws me off everytime I listen to it XD.  It’s not bad, but it needs more XD.

So the final track on the single is a cover of ICE from AKB48’s Aisareru to Iu Koto but oddly was never released physically…>.<.  The song sounds really nice since it was made for an anime.  As it is another slower song out of the bunch, Not yet’s version isn’t bad but once again it kind of comes off as a tad boring and just kind goes nowhere except in the chorus which is nice but doesn’t bring enough power.  I just don’t think it really suits them xD

I’m guessing we could be getting an album from the quartet soon since Suika BABY is their 4th single and all.  I’m still not thrilled about it because they still kind of getting the bland stuff that AKB doesn’t really want.  I just can’t believe they’re given such mediocre songs but somehow still can stand for it.  I liked guilty love the most but that’s not saying a lot.  I hope the album won’t be as bad as I think it’ll be…but time will tell I guess haha.