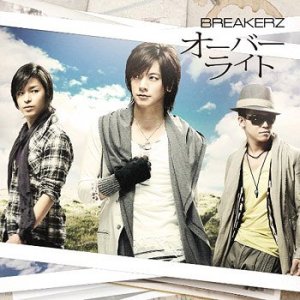 It’s been a while since we’ve seen a light BREAKERZ track be an A-side, “Hikari” I think?  Overwrite is a pleasant tune from them and I like hearing DAIGO and Akihide throughout the song.  It’s a moving track since I also hear strings playing a major role as well behind the trio’s playing and singing.  It’s quite a dramatic tune especially DAIGO’s vocals in the choruses.  It’s a really good song overall and brought many good things.  They should do more of these kind of songs more often.

If you liked “GRAND FINALE”, then you found your song in the other A-side of the single.  Nounai Survivor is energetic but also has a certain anime-esque feeling like SPYAIR.  It’s energetic but I felt DAIGO gave a stronger performance in “Overwrite”.  However, I liked the energy overall and the guitar solos as well.  It’s a solid rock track from the trio, but they do have more explosive songs that are styled like this as well.

Originally from the trio’s second album. “CRASH & BUILD”.  EMILY is the fourth song from that album that gets the acoustic treatment on a single.  I never heard the original of course so no comparisons.  This version of it though is kind of creepy in a way but also nice to listen to.  Very simplistic and light before it gets into a more up-tempo fashion and I’m kind of impressed at both the guitarists and DAIGO’s vocal performance.  Edgy, creepy, and strong…this is probably their best acoustic version track yet.  Though it’s hard not to chuckle at ~emiriiiiiiieeeee~

Second single in and I kind of like this single more than “Miss Mystery”.  I like their rock ballads and Overwrite is nothing different and I enjoyed DAIGO’s dramatic sound against the arrangement of the tune…so epic.  Nounai Survivor reminds me of “GRAND FINALE” but not as awesome if that makes sense.  Still a good song overall.  However, the single once again won because of its acoustic rendition of EMILY.  It was short but still powerful!  Let’s keep the ball rolling! 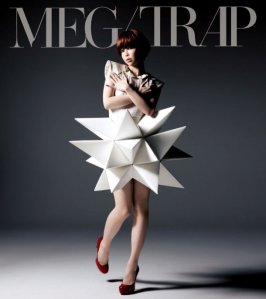 It has been quite a while since MEG has done something (well besides her cover album).  TRAP is her first A-side in quite a while where Nakata isn’t involved…at least since “FREAK”.  Working with Shinichi Osawa and another person she’s worked with before she met up with Nakata, TRAP really does go back to her earlier stuff like “scanty blues”.  It’s definitely lowkey and quite smooth to listen to.  You can also hear some French-like ideas since she was there during her hiatus and all that.  It’s cool and MEG sounds actually nice amd fits the funky atmosphere.  Great return under a new label and everything ^_^

The first B-side of the single also carries the low and chill form but this time MEG’s vocals has a distant echo/filter added on giving this song a very interesting glow and atmosphere.  I don’t find it as great as “TRAP” because I find myself drifting away from it since it lacks movement and keeps at the same pace the entire time (which is a couple seconds shorter than the lead track).  The synth solo and arrangement though is what keeps me around which is nice though.  I’m sure its instrumental is more impressive.

Then we get into another cover song and I recognize it because misono covered it a while ago.  The song is pretty different from the other two because there’s no synthesizers to be found and is more focused on guitars and drums to lead it by.  It’s also quite short at 3 minutes but the song is interesting.  Kind of cute, kind of peppy…but MEG is under auto-tune.  It’s not what I expected to hear…but after “LA JAPONAISE”, anything can happen.

It’s been quite a while but I think MEG came back with a solid single in TRAP.  I love TRAP for its classy and loungy atmosphere but being cool at the same time.  Seventeen Rendezvous is OK, but I rather listen to its instrumental more than hearing MEG sing (she hasn’t really changed much in vocals).  The cover song is a bit unusual on this single since it doesn’t sound like any of the songs but it’s ok for the most part as well.  WELCOME BACK MEG!