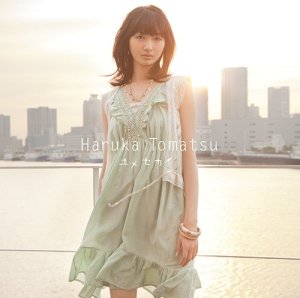 I like how Haruka opens the song quite smoothly, I wouldn’t have expected a ballad to come from her but this is a nice change of setting actually.  Her voice is actually quite solid which I don’t think I’ve said yet through the singles I’ve reviewed from her.  It’s a song that actually fits the anime its for and is just pleasant to listen to song.

The B-side is actually was what I was expecting the A-side to sound like.  I don’t know why but when I listen to this but I keep thinking of sphere’s music because it’s right in their lane of stuff they would release.  It’s upbeat, silly, and Haruka is enjoying the song even though her pitch is a bit higher.  It’s fun and made me tap my foot with it lol.

It’s been a while but it’s nice to see Haruka release a new single (the third one in this set) but Yume Sekai is probably my favorite single I’ve reviewed yet from her.  The leading song is a pretty strong ballad and made me notice her vocals a lot more in a positive light while Issai Gassai took more of a fun and silly route and that actually worked here…so where’s that album? XD