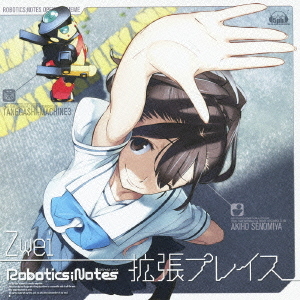 Is it just a little weird to say that I’ve never got accustomed to Zwei under 5pb.?  I’m just used to their older stuff that their new direction has been really weird.  Kakuchou Place is probably a good example of how uncharacteristic this sounds for them which has a butt ton of synths involved.  I think both Ayumu and Megu are singing in the song which is new for me and they sound good together.  A little too calculated, but it’s not too bad.

I think the synths do play a much bigger role in the B-side however, but it also sounds like a heavier and darker track which still kind of strange for Zwei but this song is kind of cool.  Ayumu sounds kind of badass in the song since she has this steely and cold voice that just sounds epic.  Then the chorus comes in and it sounds a bit strange to me but I feel like this is kind of a grittier and more evil “Dragon”.  I think I kind of enjoyed it.

Zwei’s 4th single and I’m still struggling with this new Zwei that has appeared.  I’m not sure why, but I feel like the duo aren’t meant for animu songs though some of their stuff has worked like “Kaze no Senritsu”.  Kakuchou Place might be a little bland but it’s better than “Koyubi no Paradox” at the least and MONSTER is definitely growing on me as one of their best B-sides.  Not bad!

It’s been a while since UVER has done a ballad track and it returns in form with THE OVER.  I like how it builds into the chorus which is pure rock and TAKUYA singing in his normal style.  Personally, this song is probably my favorite ballad/rock song I’ve heard since I started to review them so it’s pretty good on that level.

We have a song titled”THE OVER” and now we have THE SONG which is kind of in the same area of arrangement is kind of a little blah for me but the chorus is less powerful and IMO, it’s kind of worse because TAKUYA’s singing is rather bland and kind of lacks note movement so it’s a bit tedious.  It’s alright, but I just don’t find it to be amongst their good B-sides.

A bongo drum intro for a song called Massive?  Yeah, I don’t get it either, but this song is kind of unique.  Unfortunately, the more deeper I go the more obvious it becomes fact that Massive is just merely a instrumental track for the band.  I guess it’s nice that they have something like this but I kind of wanted more than what we ended up with.

I’ve kind of been losing interest with UVERworld in recent times but they brought back with “7th Trigger”.  With THE OVER they kind of continued since I did end up liking the lead song the most.  THE SONG has quite a few problems going on and it’s just too meh.  Also, I would’ve preferred if Massive was a full vocal track because the instrumental sounds really nice and it could’ve worked with TAKUYA to be honest.  Definitely a downgrade from their last single.