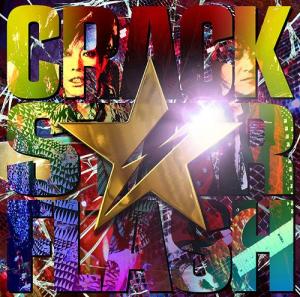 Not wasting anytime to start the album up with a strong track, we have CRACK STAR FLASH which is of course the title track.  I love the power and energy of the track for sure since SHIROW sounds so powerful and fits with the aggressive guitar riffs and the like.  Definitely a great way to kick things off the album for sure!

I am so happy to see that all 3 A-sides made the album cut and they were all stellar tracks in my opinion.  Can Do (the 2nd released) comes first on the album and since it lies in between “RIMFIRE” and “Ai no Warrior” this was a really cool song.  The things I said in the review still apply here which is really I love the energy and speed of the song but worried about KISHOW’s vocals.  It’s just a really solid track and I enjoyed it ^_^

Jeeze, the duo really want to make this album come off powerful don’t they?  NO PLACE LIKE A STAGE is probably the hardest song I’ve come by yet on the album.  I guess to make up for weakness in the vocal department from “Can Do”. KISHOW sounds a whole lot better here and it seriously shows how powerful this tune is.  I really liked this song and e-ZUKA really gave a great performance too in the arrangement.

It’s nice to see half of the B-sides released in the era were included in this album as well even though most of them were weak.  Being from “RIMFIRE”, the song didn’t really stand out there because it was after such an amazing track.  On the album, Urban Sweet does end once again being underwhelming because it comes after “NO PLACE LIKE A STAGE” which is just baffling.  As a standalone, the song sounds good and fits the album snuggly, but it just isn’t as strong as many of the others.

Moving on, I was quite surprised our next song begun with a sitar solo mixed with e-ZUKA’s guitar playing and then seeing it led into this hard-hitting track!  Sadly, the song goes into a weird funk when SHIROW starts to sing and it’s really hard as well but gritty and kind of annoying to hear it.  Then the chorus happens and it’s slow and bright which is a total contradiction to the spazzy verses….I jsut didn’t like howt his song turned out.

I was so happy to see Mesmerize make the album cut because this song was just amazing and was the best from “Can Do”.  I seem to really enjoy the more powerful songs on the album so far but while this has heavy parts, there’s some slower parts too.  I’ve mentioned this before, but KISHOW sounds like GACKT in this song with the love of vibrato that goes on here.  I liked it since it showed how much control he has and it sounds WAY BETTER than in the last track.

I’m curious to why they decided to add this over the other B-side from “Ai no Warrior” because this is one long song from GRANRODEO.  It;s still the longest track on the album and I still find that it’s uncharacteriscally placed wrongly on the album.  This would’ve been appropriate as the ending track becuase it’s bright, long, and would’ve made a great tour song.  Not my favorite on the album, but it’s not terrible…just a bit too long and weird as the middle song.

After that long track, it’s great to see RIMFIRE which is definitely my favorite A-side from the album.  It’s hard-hitting, KISHOW sounds great and takes the song by its horns.  It’s still a great song to listen to and just brings me back into the album after kind of losing a little interest after “HAPPY LIFE”.  Great song!!

Oh hey, I hear a little bit of V-kei out of 0-GRAVITY with that intro.  Though after KISHOW sings the intro, the song reverts back to their anison rock sound.  I quite liked the song even if it kind of rides under the other power-heavy songs.  Not much else to really say about the song but it’s average, I can grow to enjoy it.

As the album’s slowest song, Sameyuku Netsu does a fine job here by including string to go along their arrangement.  For being a power ballad, Sameyuku Netsu brought back those GODLY vocals from SHIROW and he suited the song so well…I couldn’t remember any of the ballads from their last album, but this is really good!

I guess for the fact that “HAPPY LIFE” didn’t end the album, Kibou no Kanata e decided to tackle it and I approve of the acoustic nature of the song right from the beginning.  It’s another long track though and while it does brighten up at the chorus when e-ZUKA joins in, but the song doesn’t leave a mark on me….but it’s a nice final track.

I was pleasantly surprised with GRANRODEO this time around!  CRACK STAR FLASH is definitely an improvement over “SUPERNOVA” even if that album was good too.  There was seriously one track I loathed off that album, but the rest were pretty good in their own way….It seems like the duo is finally getting amazing!  Yeah I definitely *RECOMMEND* this!!!