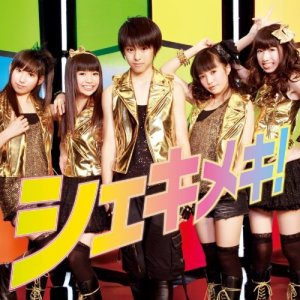 As the only original track on the single, Shekimeki! is seriously sounding like AAA now which is a bit of a good sign and a bad one if they keep going like this.  The song itself is reminds me of some of AAA’s earlier songs, but with a touch of that idol sound that Dream5 is known for.  I do like the upbeat tone of the song and there’s some great singers in the group to keep it above the water.  I kind of enjoyed this song even moreso than their last single!

So the rest of the single is cover songs and my first reaction to the first one is…another TRF cover?  I guess I shouldn’t complain too much, because I kind of enjoyed this take of their song, but it’s not really any better than AAA’s take but then again they have overall better vocals.  It’s still the same cheery song though and Dream5 handled that very well.  Not bad!

What is up with everyone covering Chisato Moritaka’s songs?  Well actually to be fair, whenever I think of this song…I think of Minimoni’s take of the song.  What I remember, the song is an educational track for us Westerners learning the various areas of Japan!  It’s still a quirky lesson song, but nothing beats Minimoni’s cover.

How many singles is this…5?  Shekimeki! is a cute song and might be one of my favorites of the current era.  Something about this group screams innocence youth and they take it well even though it’s hard to make out the vocals (especially poor Akira (where’s puberty for you siiiir).  The cover songs were a nice incentive…not the best, but faithful enough.  With an upcoming 6th single, I wonder where this album is…