There were quite a lot of covers this year so let’s just dive in before I get bored of typing this one out!

So close to making the top 10! 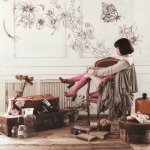 I’ve noticed that the first four mentioned: Angela Aki’s Kokuhaku, KOKIA’s Hikari wo Kasanete, yanaginagi’s Vidro Moyou, and Kana Nishino’s Always kind of has this simplistic yet beautiful concept.  Angela’s with the paper flying around but she’s playing her piano, KOKIA’s being more suble with the light shining in that desolate room she’s sitting in, Nagi’s being a bit more pattern-friendsly and classy and Kanayan’s with the flowery field and bright cover.  As for Larval Stage Planning’s Trip -innocent of D-, I love the wings and the whole chessboard look to it.

Starting the top 10, we have MiChi’s cover of TOKYO NIGHT and I really liked the all black/night cover with the Tokyo Tower being lit up even with the blur effect on high.  I do question MiChi’s fashion sense but I still like the cover a lot! 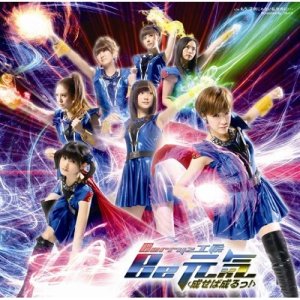 I think of all the covers from H!P this year, I thought this one from the Berryz was quite energetic and kind of has this futuristic badassery.  Plus the girls have their colors with those laser beam-ish attacks…it’s pretty awesome! 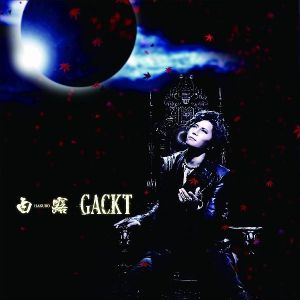 I know this cover is kind of like another of GACKT’s covers, but I really like the dark tone with GACKT looking up at an eclipse with rose petals raining down while he’s sitting on a throne.  Pretty simple cover but quite effective for the song!

I guess the recurring theme for me is dark covers…Yousei’s single cover for filament was a really cool looking cover from the lady (Yui?) being suspended like she’s in a web in a forested area is kind of freaky…but cool at the same time.  Creepy cover but it’s a great cover for the duo!

I guess this is what happens when you escape from the web…you fall to the ground in a cemetary and looking like a zombie it really worked for ALIPRO.  I’m always impressed with how much effort they put into the covers and this was nature-y and creepy!  Lovin’ it! 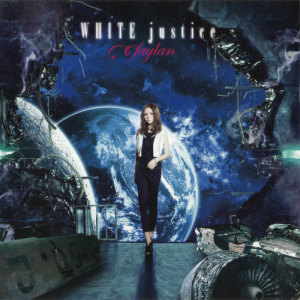 Another artist that I’m usually impressed with the art covers, faylan’s cover for WHITE justice is kind of cool…a little simple with her pose but I love the spaceship with a blown out area with a clear view of Earth behing her and the blue space.  Such a wondrous cover though lol.

There’s something about the whole storybook-like atmosphere I get with SKY HEAVEN that I thought was so charming.  Plus I think it has a little nod to the whole Jack and the Beanstalk going…Cute and nicely drawn in a way…and the gold border is cute too lol.

There’s nothing wrong with being space pirate and MomocloZ’ cover for Mugen no Ai is nothing short of epicness!  It’s just cool and flashy and seeing Kanako leading the group is really cool though strange seeing Reni being faded out…still this cover is bangin’!

Once again, simplicity won me over with Mika’s Hatsukoi.  I love the whole floating in space  with stars all around and sitting with a bicycle is sweet, yet classy.  I approve of this cover a lot! 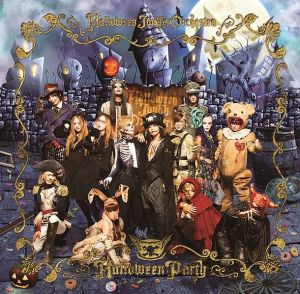 C’mon, I think we all know I was going to choose this because of all the costumes and Halloween goodness this cover has.  Everyone is dressed as a different thing like Kanon being a cross fusion of Little Red Riding Hood/Big Bad Wolf and RINA as a bunny, and etc. etc.  I just really loved this cover and the castle behind then fit the subject at hand too…Yeah this was my favorite cover of the year!

Close to the worst! 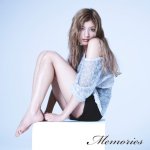 So many bad covers this year!!!  Starting with Vanilla Beans’ Choco Mint Flavor Time, the cover is quite bland for them, plus with them singing into Baskin Robbins ice creams and wearing waffle cone dresses is just quite blah blah.  The blandness continued with Rola and her cover for Memories, which is just too place with her sitting on a platform…nothing else really.  The whole rain on a window shtick on the Kuchizuke cover from Plastic Tree is a bit meh, but their singles covers this year have been weird to say the least.  I’m sorry Kiyoe, but the cover for Haru Uta does not make exactly look any good to be honest.  For FLOW’s Rock Climbers the cover is really plain…and kind of extremely cheap to be honest.

I mean Kanayan did have some rather eh covers this year, but GO FOR IT!! was a bit tragic.  I mean the neon colors and quote-on-quote balloons were one thing.  Kana looking a little idol-ish on the cover, the rabbit mascot and the title writing is about as meh as it gets.  I just kind of gave up on it, even if the song is good lol.  This cover was just yikes.

9. angela – THE LIGHTS OF HEROES

Something about the single looks really cheap and the whole foreground to background backdrop remind me of “Alternative” but was because the colors just didn’t work together…plus what is up with KATSU’s outfit…it looked a bit out of place next to atsuko’s outfit >.< 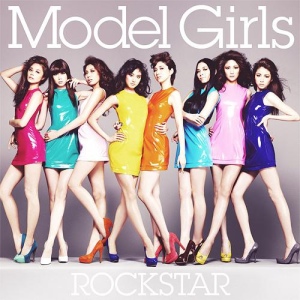 Nothing says cheap like Model Girls’ cover for their debut, ROCK STAR.  It might be good for the ladies as they are used to the camera shots and all, but the whole latex outfit and color-coded seperation did clash with the backdrop and while it might help seperating the girls apart (like Momusu and MomocloZ) but this doesn’t seem like it works here for me.  BTW, the shoes don’t match the outfits >.> yeah… 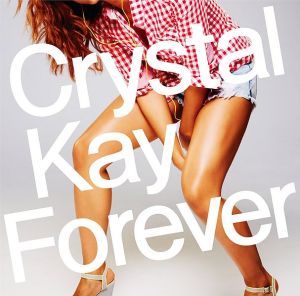 Yeah, Kuri didn’t have great single covers but I actually couldn’t guess why she only put her legs for the Forever cover.  Legs only covers are kind of meh and the angle of the shot plus her constipated pose left me rather in a laughable position.  I just can’t with this cover to be honest lol. 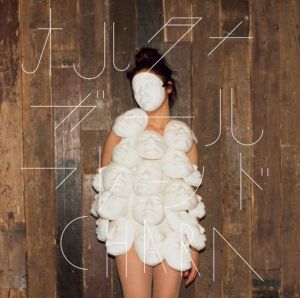 You know it’s just a little strange when you’re wearing a dress made of plastic masks.  I mean Chara is being a bit more creative with her covers since returing to a major label, but this was just a little too out there for me and it looks so awkward looknig at it lol

Oh Ayaka another boring cover this year?  Smile Smile is just plain to me and while she smiles and has a cute hat of flowers, it still didn’t make up for everything else that was plain and just yawn-worthy. 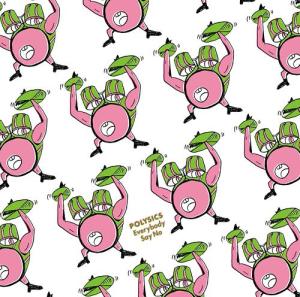 Huh…a drumkit with muscles?  I really don’t know where this idea came from but that’s kind of freaky and then to see the design being repeated across the cover is just putting salt on the wound.  Yeah, this is kind of a bad choice. 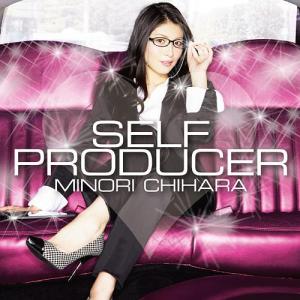 SO MANY SPARKLESSSS…lord Minorin, I enjoy you and all, but this cover seemed so strange for her and her as a businesswoman sitting on purple furniture…what is she playing at exactly?  Icky!!!

SOOO MUCH EYESHADOW…Miliyah I don’t want you looking like you had a rough night on the streets of Chicago, please learn some form of makeup prevention lol….yikes!

We all knew this was coming!  Momusu took childish to a very horrifying level with the cover of Pyocopyoco Ultra.  While I do like the one I used for the review, the rest of them were pretty much a travesty.  The older members looked rather uncomfortable with the whole idea and the COSTUMES…lord have mercy they had to wear chocobo skins for this…it really was bad and it carried into its PV…oh god was it the worst of the year!