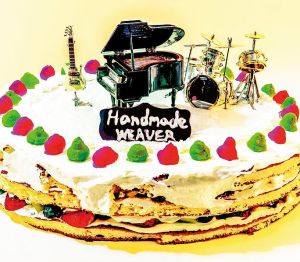 It’s really cool that WEAVER begun their album with an introduction as bright and upbeat as this.  There’s a lot of Yuji in this track and he’s such an amazing pianist that it just helped this track on a great level as he’s playful and fast at the same time.  Yeah this was an impressive way to start the album off.

The same upbeat and joyous arrangement slides into our first vocal track on the album and I once again easily drawn into Yuji’s arrangement and he sounds quite lively!  It’s like “Performance” but with actual vocals which I’m more than happy with…what a great track this is!

Into our next track, Kaze no Fune kind of reminds me of the “Calm Lands” from FFX-2 with its piano melody and essentially happy nature.  It’s not as bouncy as “Shall we dance” so I do kind of like the slight switch in styles here.  Plus Yuji’s vocals are nice to listen to, flowing around the track like that!  It’s quite an impressive tune from the trio.

I was slightly tricked with the intro for Reach out because I thought this would take a break on the happy-go-lucky arrangements, but Reach out becomes another song that kind of bases its sound on the more happier sounds, but there’s strings present to kind of break the monotony which is a surprise for me.  Still, I would like a break from the happy piano Yuji!

>.>  It just doesn’t stop huh?  I will say the song has a certain clapping rhythm that would be nice to follow along.  It’s definitely one of those songs that’s perfectly suited for the season of Spring and all, but after the previous tracks, this is just coming off as plain and vanilla for me.

Finally, it seems like Artist is trying to cut back on the light-hearted sound with something a bit more driven and edgy (in WEAVER terms that’s not very much).  I actually could’ve seen this song being released as a single because it just has A-side properties!  I actually quite like this song a lot more than I would’ve initially though.  Good job here!

It seems like WEAVER keeps toning the album down a bit because our next song is even less happy-go-lucky.  My problem here is that it just moves by without leaving too much of an impression on me lol.  The song isn’t terrible though but it might be the filler song of the album…at least that’s what I get from this.

8. Futari wa Yuki no You ni

With the next track, the forgettable songs continue with Futari wa Yuki no You ni.  The song is what if they made the piano slow its ass down and made Yuji sing a lot more.  I like that it is a bit melancholic so it kind of stands out on the album, but it’s still kind of a boring song that really doesn’t go anywhere for me…not even the chorus did very much for me.  Yeah this was pretty boring of a song.

As the only digital single to represent the album (strange…no “Egao no Aizu”?), Gizensha no Koe was a surprise to have been included but then again nice too.  I will say that after the last couple of songs we did need a pick-me-up.  Against the other songs on the album this isn’t the strongest either, but it’s catchy and Yuji doesn’t seem to overrule the song either.  It’s just a nice combination of the band together.  I actually can see myself loving it down the road.

Oh hey chanting intro!  Free will reminds a lot of stuff from “Jubilation” with the amount of strings and the floaty-ness of the song as well since it gives the song some identity on the album and I enjoy that a lot!  It does kind of remind me of a certain song from Sakanaction (“Identity” ironically).  It’s a nice track overall and it definitely brought my interest back up for the finale.

I LOVE the strings introduction into the album’s final track a lot and even past that, the song sounds really strong and doesn’t really fade away.  Yuji also sounds pretty soothing and since the song isn’t a happy fest, this felt like a breath of fresh air!  Definitely a pretty song to end the album with for sure!

Would you believe that for a band that’s been around since 2009, this is their first studio album?  WEAVER took long enough and finally released Handmade!  The album is OK, but they need to spice things up and not let Yuji carry the songs with his piano…makes the songs very similar to one another…let the other members do something man xD.  This might be a problem in the future if they keep going because I felt the same here as I felt with their last mini-album, “Jubilation”.  Though there are stand out tracks…which is good!  Still I hope they do something more with their music in the future.