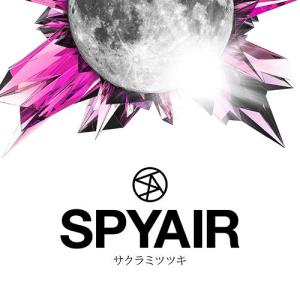 I was thinking that since ENZEL left the band would just lose synths, but Sakura Mitsutsuki actually has a lot more synths than seen in the last couple of singles from the band WITH their DJ.  As it’s the band’s sakura song, this was quite nice to listen to.  The band is definitely rockin’ out and IKE’s vocals do seem a lot more steadier as well.  I enjoyed this quite a lot!

Then we get to the B-side and Turning Point is even heavier than “Sakura Mitsutsuki” which is really surprising and yet really cool to listen to!  It actually reminds me of a ROOKiEZ iZ PUNK’D song with the guitar riffs and powerful chorus.  This was just a epic song from SPYAIR and was surprised this wasn’t an A-side because this would’ve been great!!!

SPYAIR’s first single without ENZEL and they seem to really rock out on this single and it doesn’t even seem he even left the band with how much synth is in the leading track.  Plus, Turning Point is quite heavy and very awesome from SPYAIR.  Great single overall and it’s great to see the band moving forward ^_^.