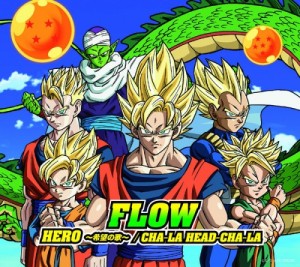 I was quite surprised to see that FLOW would be doing a theme for a DBZ movie but here we are with HERO and this song is pretty energetic and wild like the series itself so its an amazing feat since I love FLOW’s more louder songs.  KEIGO and KOHSHI once again share the roles and I just love the song for its wild energy and it’s so true to FLOW’s sound…I think it might surpass “Brave Blue” actually.

Wow, so the other A-side is a cover of a 1989 Hironobu Kageyama song and also one of the opening themes for DBZ and good lord they chose such a classic song here.  FLOW’s version of the song is VERY close to the original, but given the modern touch.  I love this take because it’s got the same awesomeness throughout the song.  I really like this cover and happy they stayed faithful to the original.

The remix for the single is kind of strange being as it’s one for RISING DRAGON (which was a B-side to GO!!!, which that was a NARUTO single).  This just seems a bit freaky.  I couldn’t really understand the need for the remix since it’s really random and just kind of thrown together for the sake of having a remix.  At least the rapping in the parts are really cool to listen to but otherwise, the remix is just a bit too much.

Last but not least, we get an English version of the secondary A-side and maybe FLOW shouldn’t have tried this because both lead singers sounds very weird and the accents really make the lyrics essentially impossible to understand (and I swear I hear Japanese still being thrown around).  Yeah this was kind of meh.

FLOW ends the “FLOW THE MAX!!” era with the second single released and I was pleasantly surprised by it!  HERO is quite energetic and fun to listen to, plus FLOW sounds great.  Their cover of CHA-LA HEAD-CHA-LA was awesome and definitely did the original justice, but only the original, the English version was kind of bad.  The RISING DRAGON remix was random but I suppose someone could get a kick out of it XD.  Overall, good single!