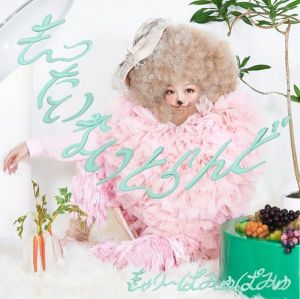 Initially, the song really didn’t do much for me in the first couple listens, but then somehow it started to work its magic on me like “Tsukema Tsukeru” did back then and yeah, there are some similarities between the two but I think that’s kind of why I like it.  This song is quick-paced and has some really interesting part like the piano melodies and the “Halloween-ish” sounds in the background of the 2nd verse.  Overall, it doesn’t surpass most of the “Nanda Collection” singles, but this is a good start to a new era.

A 3-minute track for a B-side?  It’s strange to say but it’s actually faster than “Mottai Night Land”.  I do like that it’s so kiddy and youthful of a song but the song doesn’t seem to resonate any other way really but almost a clone of her other B-sides but the big thing is the speed and the piccolo melody that comes in once in a while.  It’s cute, but it’s a little much for me >.<.

Following suit, the single rounds out with the extension of Ninjari Ban Ban.  Unlike the lazy extended take of “Fashion Monster”, Nakata actually worked a stronger intro for Ninjari and it works (even though it is your typical club intro).  Of course once the intro of the tune starts, it kind of just follows the same song with not a lot of noticeable changes but hey I have no problem because I enjoyed this song a lot originally.

As the first single after her sophomore album, she started off in the middle with Mottai Night Land.  As much as the song makes me happy, it’s kind of in the same position as “Tsukema Tsukeru” and “Furisodation” where there’s just so many leading songs that are just better, but they are good nonetheless.  Sungoi Aura is rather forgetful and bit hyper for me…though it seems her B-sides struggle to make me enjoy them in full lol.  Of course there’s Ninjari Ban Ban being extended and it’s more or less effective because I love the original and the extension really just adds a longer intro and outro.  Overall not a bad start, but let’s hope Kyary gets better (wishes “Into Darkness” was a bonus TBH”).

Filed under: CHiAKi KURiYAMA — solarblade @ 9:42 am 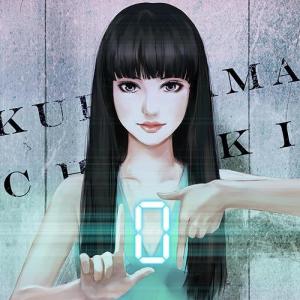 It’s kind of strange that we’re getting this song NOW (at the end of October) because 0 was released as a digital single back in May >.>.  Anyways, the song hasn’t changed since its initial release and honestly, that’s good because 0 is such a cool change for Chiaki!  Unlike her pop/rock singles before, this is more EDM and full of auto-tune which might surprise many of her fans.  The song is quite cool and fun to listen to and really gives Chiaki a range of sound that I really love!

At least Chiaki puts a B-side to make up for how old “0” is.  I wasn’t sure what we were going to get, but voice seems to more closely related to her previous singles by being rock-tinged but somehow Chiaki is still under auto-tune which is a bit strange to listen, but it kind of adds a different sound against the arrangement.  I do wonder how much better it’d sound like if Chiaki wasn’t under the vocal filters but this isn’t bad.

Hmmm remixes huh?  Well I wasn’t surprised the remixes were going to be more electronic but the Moonbug remix takes 0 into a dubstep field and while I like that it isn’t a TOTAL mess but the effects can be a little too much to listen to.  Though I do love that the remix keeps it’s glossy feel but at the same time bring enough change.  The dubstep parts though are definitely the highlights of the song though!

Then I became curious as to how voice would be treated and I really like that intro and how the track keeps some of the guitar lines but I can’t get behind Chiaki’s glitched vocals because it just gets annoying!  It’s alright of a remix, but it doesn’t capture my attention as much as “0’s” did.

While it has been 5 months since “Toyosu☆Luciferin”, I felt like this single was a slight copout just to have 0 a bit more available.  Not to say it was a weak single but was it necessary?  I mean, I guess voice was alright of an addition and the remixes were OK at best…but the single was still shining the most from 0.  I really liked that Chiaki took a chance with something a bit more electro and it worked in that respect.  Who knows what she’ll do next!

Kalafina – Kimi no Gin no Niwa 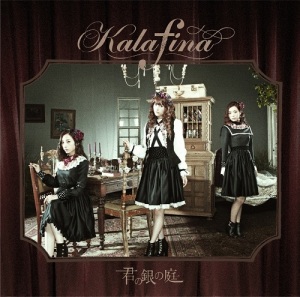 I really love the intro for the group’s A-side plus for the total change after the ballad “Alleluia”.  It seems to bring the trio back to more of a folkish and bright sound like “storia” was!  Even more surprising is that WAKANA is leading the song (which is pretty rare in the group’s list of A-sides).  The song in its entirely is really nice of a song to listen and is full of life!  Definitely an improvement after the last couple of A-sides).

What if “consolation” and “Eden” and “Mirai” combined into a song?  Well, you’d get our first B-side on the single, misterioso.  I love the breezy output from the song and the added flute kind of gives it a sound that almost makes me want to think Uematsu had some kind of influence.  You get to hear more from WAKANA and HIKARU in this song with some Keiko thrown in and I’m just loving the song in its entirety.  Best song from the single!

Then the 2nd B-side comes in and unlike the positive and bright nature of the previous tracks, Tsuioku has more of a darker and a struggling kind of nature to it and I’m enjoying the movement of the song as it goes along.  There’s just something so enjoyable and unsettling about it that I feel so intrigued to listen to it over and over and hearing HIKARU just being badass is just enough for me to LOVE it.

After nearly boring me to death with “Alleluia”, I was wondering if Kalafina (and Kajiura) lost that spark to their music…but BOY WAS I WRONG.  The entire single was such an improvement that this could BE my favorite Kalafina single yet!  Kimi no Gin no Niwa has such a nice and fun folk arrangement that I couldn’t help but smile.  Though misterioso with its even brighter feel and Tsuioku with it’s more darker tones really filled the single out and made it more stronger.  Feels like Kajiura has refound that interest! *RECOMMENDED*