The first of 3 posts (rather small no?) I felt like it’s a good enough time to talk about the PKMN and plus I did finish it so I’ll talk about what I think overall unlike the Unova regions…(because that was midway).  So let’s get started OK?

We begin the list with the starters of the region of course starting with Chespin, Quilladin, and Chesnaught!  While they were the final starters I managed to get, I still was pretty happy that I got one!  I still do think that it’s my least favorite designed set of starters but I’m also happy it’s not a reptile of any sorts!  I do find that it’s final evolution, Chenaught is Grass/Fighting which is nice (though Breloom and Virizion share this type) but still not one of my favorite starters TBQH…defensive though which is pretty good and it’s signature move Spiky Shield is good in ways! 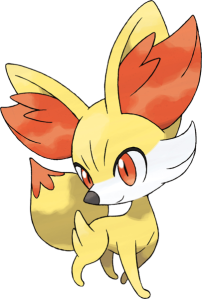 Of course we lead into the Fire starters and even though I said I would’ve chosen it as my starter…I didn’t XD.  Though I did manage to snag one and I am surprised how good it turned out to be!  I do love foxes so that already worked me over in the game!  I do love Delphox with the wand and it’s additional typing becoming a Fire/Psychic type (which only Victini and a Zen Mode Darmanitan has).  Great typing overall and one of the better starters I have! 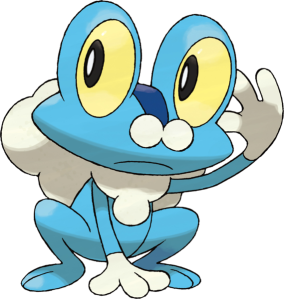 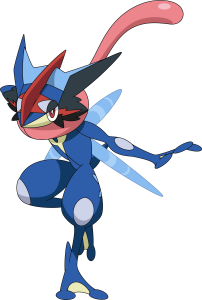 And the last of the starters, yes people I was Team Froakie this time around mainly because…seriously a frog ninja!  How badass is that?  Well it did kind of backfire because the Froakie line didn’t really learn many offensive attacks (most from TMs and the high levels).  Even it’s signature move, Water Shuriken is just a Water-based Bullet Seed.  Plus it’s Water/Dark typing is a little less interesting (because the Sharpedo line, Crawdaunt, and Mega Gyarados has this typing as well).  Though I did enjoy using him overall, I think that Fennekin was the best choice TBH.

Though introduced in Gen 7 (well technically before its announcement), in the XYZ Anime, we were introduced to Ash-Greninja which was a bit of a fusion but more of synchro evolution where Greninja takes on an appearance like Ash.  Though we’ll get our first taste of it in the Demo of Sun/Moon where Greninja comes with a unique ability, Battle Bond where if it beats a Pokémon, it’ll turn into it (though only seen in trainer battles where there’s more than 2 Pokémon on the opponents side).  Even better is that you can transfer it to the main game for continued use (albeit having to wait because of its higher level and the level blocks the series normally puts up.

Getting into our “rodent” pokemon of the generation, Bunnelby was one of the first Pokemon I caught though I didn’t use it much because like previous ones, they aren’t totally useable in the later part of the games (unless you really leveled this sucker high).  Then it evolves into Diggersby and it gains its unique typing of Normal/Ground (which still isn’t a total upgrade, but whatever works).  I like em more than Buneary and Lopunny but they still aren’t THAT great 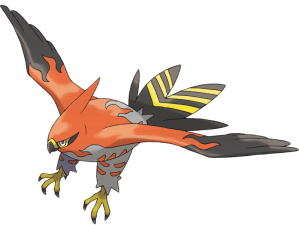 Ahhh so we get the region’s Bird and I’m happy that it’s stepping out of the normal when compared to the previous ones.  I mean Fletchling is still quite Normal/Flying but the biggest change is when evolves into Fletchinder its type changes into Fire/Flying (which shares with Charizard, Moltres, and Ho-oh, 2 of them being legendaries).  Then it becomes Talonflame (which I still loathe the laziness of the name and how far apart it is to the “Fletches”, but it’s still a pretty powerful PKMN!  I do like we get something like this early in the game (though people can get Charmander early as well…).  Still not bad, but Staraptor is still the better choice!

Seems like we’re swiftly getting to stuff we expect from every generation yet.  Next comes the Bug Pokemon of the generation and to be honest, Scatterbug and Spewpa are quite boring.  Then you figure out that this line is the ONLY Bug representation in Kalos and it just leaves you baffled.  The the big thing is Vivillon which comes in 18 different looks (aesthetic changes) depending on where you live (which means you only get to find one kind in your file, the rest you’d have to either find on the GTS or hacking them in.  Though there’s also 2 extra looks (kind of like DLC), but they’re reserved as event releases.  It’s not a great Pokemon, but it’s nice for the various looks (especially the Polar form, Ocean, and it’s newly shown Pokeball form). 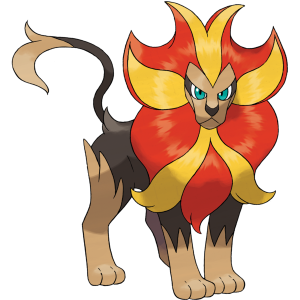 The next new Pokemon are both a little strange (though I never caught one).  Litleo is like I said VERY cute and it’s great to see Pyroar have some big gender differences like lions to in real life.  Add in they have the unique typing of Fire/Normal and well you got them basically.  Can’t say much else here, but cute! 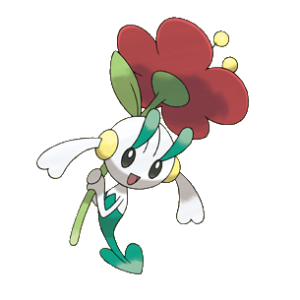 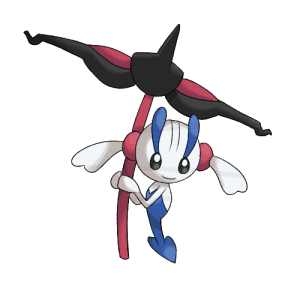 Our first new Fairy-type, the Florges line is quite something and was surprised that wasn’t classified to Fairy/Grass due to it’s tie to flowers and such.  Also the Pokemon comes in different colors like Red, Yellow, Blue, Orange, and White.  It actually looks great to have on your team but I only caught a Blue Flabébé.  BTW, like I said, first Pokemon with accents in its name!

Though within the coding of X, Y, Sun, and Moon there’s a mysterious Floette, but it’s coded as AZ’s Floette (as in X/Y, the character AZ owned a Floette that looked like this).  It’s even stronger than its evolution, Florges and learns a unique move in Light of Ruin.  As of Sw/Sh though, it hasn’t been released as an event and is only obtainable by hacks…C’mon GameFreak, just release it already!

At first with the whole riding Pokemon shtick, I was happy to see that…but as it turns out, it only happens in certain areas and the Pokemon mostly are so slow for me.  Skiddo though is a fast beast (though can only be ridden in certain areas).  To me, besides that there’s nothing too interesting about this line…I mean they are pure Grass types but nothing else really stands out. 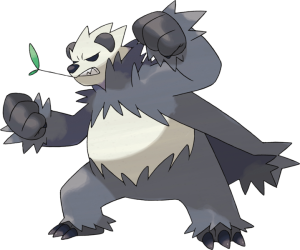 Hey, like I’ve also said before, I’m so damn happy to see pandas being represented in the game!  Starting off as a Pancham, it’s pretty much your standard Fighting type…until it evolves into Pangoro (which has a unique way to evolve which is to get it to level 30 WITH a Dark type on your team.  While it’s typing isn’t unique (Scrafty line has it), it’s still a force to be reckoned with and I love Pangoro!

As the first standalone Pokemon in the Kalos region, Furfrou I still thought was related to Absol in the first shot we got of it.  Though it turns out to be on its own merits.  Though this Pokemon fits in the gimmicky section because regularly it’s not much of a useful Pokemon (Normal type).  It’s main gimmick is that if you take it to Lumiose City to get it stylized there’s 9 different looks for it (some you have to unlock by keeping Furfrou trimmed a lot).  Once again only an aesthetic look, nothing that really does anything to its stats.  Not a bad Pokemon and it’s Fur Coat ability is nice to have! 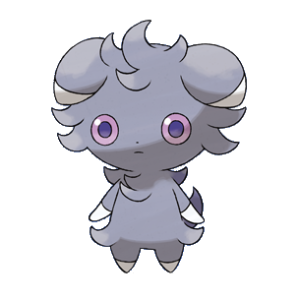 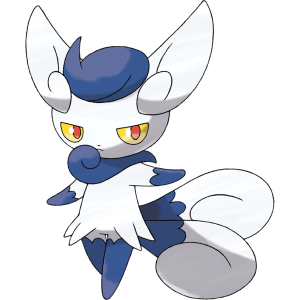 Finally it took a while before we see some catchable Psychic types (though Delphox is cool still >.>).  Espurr has solidified itself as that “soulless” Pokemon with its vacant eyes and such.  Depending on it’s gender, Espurr evolves into Meowstic and they’re treated differently.  As in the females are more offensive  (the mostly white ones) and the males (the mostly blue ones) are more defensive.  I thought that was a unique way to deal with them, but they (like the Indeedee line) aren’t recognized as different Pokemon like the Nidorans.  Interesting right? 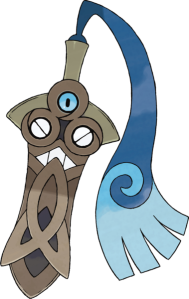 As the unique type of Steel/Ghost, the Aegislash line was such a great addition because I think it’s one of the better Pokemon that’ll survive the metagame nicely!  Honedge and Doublade (bad choice of name to be honest) have the No Guard ability which is a bit of a bummer.  At least with Aegislash, they get the unique ability of Stance Change which kind of explains itself with the picture above with one look being defensive and one offensive.  Such a fun and strong Pokemon and love it on my team!

At first, I was excited with Spritzee because it looked like it was going to be a flamingo of sorts and then Aromatisse leaked out and I was more than disappointed with the decision.  As the exclusive Fairy-type in Pokemon Y, I caught one of these, but still haven’t traded it over with the Sachet to get Aromatisse.  I think the design could’ve been more better overall.

The final Pokemon in Part 1 of this series, are the X exclusive Fairy types, Swirlix and Slurpuff.  Of course just like the previous two, Swirlix only evolves after trading it over with the Whipped Dream equipped to it.  I actually like that they made it like cotton candy and cupcake Pokemon overall.  I’m not sure which of the two is more better in the long run, but we will see XD.

NEXT TIME: WELL THE OTHER HALF XD