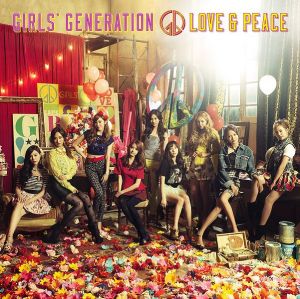 Opening the album, I was so ready for what SNSD had planned and they brought it with the opening song, Gossip Girls.  I love the clapping rhythms and the group actually showing a lot of personality and force and it’s definitely one of the best opening tracks the group had yet.  I’m already excited for this album now!

I was chuckling when the next song actually begun with the sound of a motorcycle revving away.  It definitely keeps up with the pounding dance beats but it also has the cool pre-chorus and then the cool-flowing chorus.  I also quite enjoyed the song fully and the group actually sounds SO fitting here.  Definitely another hit from the album WOO~

I thought they’d go for a streak of 3, but FLYERS changes the style on its head by giving us a poppy summer rock track which is a shift but the group still remains bright and sunny to listen to.  It’s definitely a song you wouldn’t expect a group like Girls’ Generation to actually release, but this song actually appealed to me…so I guess it is a triple hit right from the start!

Moving onto some old songs, we get the 2nd A-side released in the era and GALAXY SUPERNOVA was the better of two because it did have more of a K-pop dance sound which is typecasting there, but the song was surprisingly fun to listen to.  I will say the spoken dialogue was a bit goofy to listen to, but otherwise…definitely a jam to listen to!

Weird that there’s also a “Girls & Peace”…so the title of the album is a mish-mash?  Either way, the single released after their sophomore album still doesn’t really resonate with me.  This song is like taking “Gossip Girls” and making it cuter (though this came first).  I don’t know, there’s some parts that’s ear-numbingly catchy but it’s still rather meh to me and the whistling is a bit bonkers lol.

Wait, why is the B-side from “FLOWER POWER” on this album?  Yeah, that’s a pretty strange addition but honestly it does work after “LOVE&GIRLS” since it’s still on the cuter side of things and has a lot of phone mannerisms happening in the song and they do that ~beep beep beep~ that still kind of gets on my nerves.  At least the rest of the song is nice to listen to.

I kind of unsure how to take our next new track on the album.  I mean the verses didn’t really did give me much of interest and then the chorus opens up into this ditty sound and it’s cute but in a way ultimately forgetful since there’s just not a lot to go by here.  Is it weird that I think of Wonder Girls here?

~Leeps~…OK…those sampled jingling bells I’ve heard before (Missy Elliot much?) but the song becomes a slicker track for the group almsot crossing that R&B sound.  I think the song is a grower because I do love the sound of the song and the women really made this is pleasant song to listen to.  One of the more surprising tracks on the album IMO.

Moving to the B-side from “GALAXY SUPERNOVA”…there’s just something about it that really caught my eye when I first listened to it and honestly it’s just grown since then because it’s such a catchy dance track but retains the group cute side.  It’s almost at the same level as the A-side from its single.  I just can’t get this tune out of my head and find myself singing to the chorus and whistling throughout lol.

Of the songs on the album, I was most curious with this one because of it’s interesting title and this time around I was greeted with a pretty cool synth dance track.  It’s relaxed and has a lot of pretty sounds that just fluorish in and around the arrangement.  It’s one of my favorite songs from the album hands down!

The B-side from “LOVE&GIRLS” shows up and I still can’t get into this song either.  It reminds me of how I felt about “My oh My” in where the song tries to be cute but i just falls flat on me.  Maybe the group trying new genres isn’t fully a good thing because it seems I can’t get into either of them lol.  Reggaeton huh?

On most editions of the album, we end with Everyday Love and I actually was starting to wonder where our SNSD ballad might be and this might be the closest to what we get to one.  I’m liking that beat that’s pushing the song forward as it’s giving more of that epic beat.  It sounds the most American on the album which is strange but still made for a good closer.

HOWEVER, if you’re a fanclub member, you get a bonus track and I’m left thinking WHY THE HELL WOULD YOU NOT INCLUDE THIS ON THE ALBUM?  Honestly, it’s so good and it definitely encases a mix of the group’s cute personalities with a pretty cool EDM arrangement.  I don’t know why, but it’s so fun to listen to and should’ve replace “Lingua Franca” on the album TBQH.

Wow, I definitely was led to think this era wasn’t going to be all that great but LOVE&PEACE is such a step up of an album over their last one by a big gap!  All but two songs really left a good enough impression to make me listen to this album over and over.  One of the better Japanese albums to come from a Korean group this year!

I was hoping what JASMINE would do after she released “Complexxx” and girl didn’t disappoint.  It feels like a song she hasn’t tried yet in her career but honestly, this song is kind of urban/electro and I can’t help for fall for its groove.  It’s such a pretty cool song from her and honestly might be one of her best A-sides (next to “ONE” and “THIS IS NOT A GAME” which is pretty big for her!

I actually thought this was going to be an original track from JASMINE, but at being 16 minutes in length, it turns out this is a megamix actually.  There’s 5 songs used here and while I only recognize THIS IS NOT A GAME as one of them.  The others are listed above and I find is strange that Addiction was the only song from “Complexx” on the megamix while the rest are songs from her “GOLD” era.  This had a lot of different electronic styles throughout and it’s rather awesome how it works each song together and the tranisitions.  A little long winded, but still a good megamix.

JASMINE closes out 2013 with a pretty cool single and a nice way to begin her 3rd era (hopefully won’t take long).  Countdown has a lot of attitude in it and it’s grittier almost heavier sound definitely left a good mark on me.  The megamix albeit long wasn’t all that bad and definitely gave us a great twist on her songs of hers.