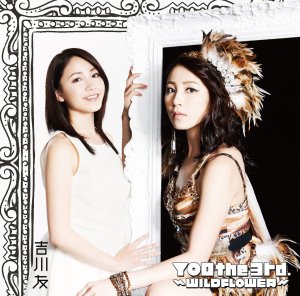 Dang, what a way to open up Yuu’s 3rd album!  I’ve already boasted enough on how much I love this song because it really shows off a stronger sound for Kikka as well as giving us hard-hitting dance track.  I guess the things that I didn’t care for too much are the opening (with footsteps and a door shutting, but that’s more fitting to the PV) and the weird rapping section (Yuu’s vocals seem a bit too girly to tackle that lol).  Beyond that, the song is a club-banger and might be my favorite song (even topping “Konna Watashi de Yokattara”).  Great way to kick things off!

Our next track is the first of the new songs and with the opening I was curious to what it’d be like because of its light opening but it seems like Akane Disco is a quick-paced funk/disco-ish song which is something she hasn’t pulled off quite yet.  I like the speed and Yuu’s vocals are pretty solid and she kept up with the pace of the tempo.  I will say it’s a lot more cuter than I expected, but it’s rather catchy!

Moving to the 2nd single she released prior to the album, this was the secondary A-side and while I wasn’t surprised this was placed as such (as both leading A-side of the doubles were of her more electronic side.  “Suki” no Kazoekata is rather cute just like the previous song, but lacks the punch of the latter.  I do like the dance beats mixing up with acoustic guitar for sure and Yuu’s bright energy gives a lot to the song, still better than the next track albeit not by a whole lot.

Seeing as this was our electro song given to us for her second single, Amai Melody starts off slowly with piano and Yuu’s light vocals before it starts to gradually pick the pace up and gets a lot more forceful.  There’s some really good parts though and it really makes the song pop out from the other dance tracks, though I do still think it’s lacking something about it but I can’t put a finger on it.

Things slow down even further when our next album track pops up.  I was surprised how bareboned of a song it is to kind of thrown in the middle of the album.  What I mean is that the song is an acoustic guitar-led ballad which might come to a surprise to many as she’s been just releasing busy arranged songs.  The simplicity of the song might not be for many, but it’s a nice and laidback tune with no tricks up its sleeves.

“Planetarium” makes it even stranger because Ii jan comes right after with its pop/rock cuteness.  Like I’ve said on the single review, this song feels like a leftover from “Two YOU” with the emphasis on the guitarwork.  I’m still not too keen on this song due to Yuu’s choice of singing here and I’m thrown off with how weird it is on the album.  My least favorite amongst the A-side (if we aren’t counting “Hana’s” movements separately).

The next new track, Konna Aishicha is another ballad (the flow of this album right now…) sounds a bit more up to date with the sound by having a mixture of guitar and piano and some underlying synths.  I also feel like Yuu sung this track a little better which stuck to me a little more but I get this feeling it reminds me of something from “One for YOU!”.  Not bad overall!

I’m still surprised that Hana wasn’t split into three songs for the album (because honestly I would’ve loved a separate version of Cosmos e no Inori).  I do love the opening for the track before it leads into Hinegeshi no You ni but this section (or first song) is really in your face and leads to really random sections.  I mean the upbeat, percussion-heavy start is fun and sounds like Kikka is having fun and all.  Then the whole “Bohemian Rhapsody” area was humorous and I thought Kikka had fun there, but it’s shortlived because we move back into the upbeat stuff.  To really know when the song changes it’s preceded by spoken dialogue from Kikka (and it really ties the whole ~flower~ thing here).  I still think Anemone no ne is the weakest part of this song because it focuses on a ballad and technically is a Xmas song lyrically.  I don’t think it really suited things in the big picture and while Kikka sung this pretty well, I wasn’t into this one (it’s like the piano take of “Planetarium”).  After that bit of boredom, we get more exposition and we’re led to Cosmos e no Inori and of the three tracks featured, I was loving this one due to the familiar electronic beats, good voice, and strong chorus.  Throwing in acoustic guitar also made it stick out amongst the other dance track and like “URAHARA Temptation”, it’s a banger totally!  Overall, this 17 and a half minute journey was OK overall, like I said, it’d be better if Yuu had just split the song into three because I can never sit through that ballad middle.

Moving to the promotional track on the album, with a title like that I was expecting something cute, but damn I was wrong.  With a marching drum intro, I wasn’t sure what was going to happen, but hearing Yuu building the song up until the beat kicks in, I was an IMMEDIATE fan of this song.  Fitting smoothly next to “URAHARA Temptation” and “Cosmos e no Inori” with its heavier EDM sound, it just kicked ass and Yuu knew this was a good trump card!  Definitely my favorite amongst the new tracks and might fight with “URAHARA Temptation” as favorite Kikka song!!!

Ending the album, Stairways sounds like something H!P would’ve done for some reason with it’s upbeat, bright nature.  It’s basically “Ii jan” with piano included which might be good for fans that enjoyed that song.  I could see this as a last track because of certain chords in the chorus and I kind of liked it a lot.  Though I think one of the ballads would’ve worked too lol.

It’s been a while since Kikka released an album and her 3rd album is definitely her best yet!  I don’t know what happened when “Two YOU” released but a lot of that EDM back then didn’t work for me and the album had some boring songs.  Luckily with YOU the 3rd. ~WILDFLOWER~ the EDM is amazing and really suits her perfectly!  The new songs on this one were good for the most part, but Planetarium didn’t fit at all and Hana should’ve been split (12 songs wouldn’t hurt would it?).  Still a surprisingly well done album!

One Response to “You Kikkawa – YOU the 3rd. ~WILDFLOWER~”