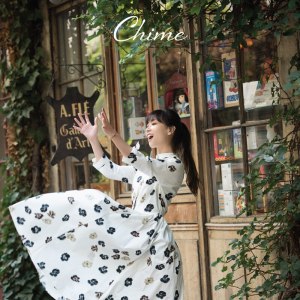 As the leading track, Chime was used as an anime theme and I don’t think I’ve seen Ai-chin do this in quite a while so I’m already interested especially since it’d have to be upbeat and Ai pulls off another fun track with Chime.  It really reminds me of “Rocket Sneaker” for some reason and some of her earlier tunes too.  I just really like her vocals in the song and the energy just sticks to you.  Great A-side!

I remembered this song because it was released earlier in the year as a digital single to promote Kit Kats xD.  Unlike the vibrant and upbeat “Chime”, kit palette is a little more toned down, but still has this bouncy and happy-go-lucky vibe.  I like the arrangement a lot and Ai’s vocals are a bit more hushed and maybe a bit playful too.  Another pretty good song on the single.

So the story goes that XOX is an English self-cover of “Dame Dame da”, a song she wrote for Shiori Tomita back in 2014.  I was curious because I didn’t even recall this song back then lol.  Of course being in English I was pretty curious how Ai would able to tackle this, but I think she did OK, but the accent is a little off here.  I really do like her vocals in the chorus as it’s more angsty and has a different tone to match the song’s more aggressive pop/rock sound.  I kind of dug it!

On the iTunes release of the single, we get the pure Japanese self-cover and since it’s more comfortable for Ai, she sounds like what I’d expect (which is surprising since her tone is so different in “XOX”).  Still, I really liked the energetic kick of the song and works well with “Chime” too!

While it hasn’t been too long since Ai-chin released something (this is her first single since her best album released), Chime is pretty decent overall.  It might not have the usual WTFness that her last couple of singles contained, going for more of a straightforward pop/rock release with all 3 tracks.  I think I liked Chime the best but both kit palette and XOX weren’t too far behind and throwing in Dame Dame da as a digital exclusive was nice too.  Yeah, great single overall!