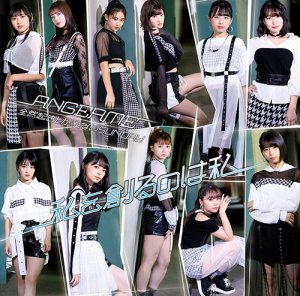 1. Watashi wo Tsukeru no wa Watashi

As the leading A-side, Watashi wo Tsukeru no wa Watashi is pretty much both a debut and graduating A-side.  On the first hand, it’s Rin Hashisako’s debut with the group while on the other half, it’s Kana Nakanishi last single with the group.  I do have to say, the song itself is kind of in the same veins like “Umaku Ienai” but a little less rockin’.  I mean I would say all of the girls get a decent solo, but some like Rikako, Murotan, Takechan, Kamiko, Funakki, and Kassa seemed to have a bigger role.  Rin did some chorus stuff and Kana had a solo in the verse.  Everyone else though had a random line throughout.  It’s a decent song, but definitely safe-sounding to me.

The other A-side is curiously enough a Tsunku creation, but I was not expecting a ballad from them.  It’s kind of an eerie song though and slightly depressing in ways.  Though it seemed like everyone but Haruka and Rin got solos in the song it feels like.  It’s a bit dark and I quite like the song for that that’s for sure.  Something unique to ANGERME unlike “Watashi wo Tsukeru no wa Watashi”.  Impressive song for an A-side!

So I have to back up a little bit for this one.  Might be curious to why I haven’t mentioned Rina Katsuta in the review and that’s primarily due to the fact that she graduated from the group back in September.  Due to that fact, she was not present for this single, but she did leave a solo song in her wake (and she did release this song digitally the day before she graduated).  Anyways, Totteoki no Oshare wo Shite right from the beginning reminded me of both Sayumi Michishige’s “Shabadabadoo~” and Kanon Fukuda’s “Watashi”.  As all 3 are graduating solo songs, it’s funny they’re all super cutesy songs that didn’t really sound like anything else on the single. Rinapuu though sounds so cute though and while this is VERY close to Sayumi’s song, it has it’s own jazzy feel and it turned out nice!

Talking about jazzy, the main B-side of the single Myouban, Galaxy Gekijou de is definitely giving them feels with this one, but it’s a lot more in your face and exciting to listen to.  I’m pretty happy with this song just having a lot of brass and sass and it just has a lot of fun with it’s sound.  It kind of surprises me that I think every member has a solo within it too!  Just surprised ANGERME has a legit B-side again (haven’t seen one of those since…”Tabidachi no Haru ga Kita”?).

What a mess this single had to come into, I mean this is the first ANGERME single without both Ayaka Wada and Rina Katsuta (well barring the solo being smushed in) and this being both the debut for Rin and final for Kanana, there was just so much going on in this song.  Though I can’t say if this single really did much for me?  I do really like both Zenzen Okiagarenai SUNDAY and Myouban, Galaxy Gekijou de as it bring such different sides to the group, but Watashi wo Tsukeru no wa Watashi was kind of the normal song I’d expect from them.  As for Totteoki no Oshare wo Shite, it feels out of place considering that Rina was already gone from the group when it releases so it just had no place (should’ve stayed a digital song, honestly).