Being the intro track into the album, Can you hear me? introduces us quite nicely with Joe singing in his native tongue of English and he sounds great even with the simple rock arrangement it has.  I wouldn’t have minded if he made this into a full song since it has a great melody and builds up really good.

Being the second and final single released in the era, Kaze no Gotoku is such a powerhouse of a song and great because of its tie-in to Gintama.  I still do think Joe’s lower and deep vocals are a bit off the wall at first, but I think it gave the tune a bit of a stronger and angsty drive to it.  I’ll be honest though, since it’s a new version, I have no idea what the difference between this and the single version is…but I’m guessing it’s the fact that guitars play a more bolder role perhaps?  I don’t know, but I really don’t hear much of a difference.  It’s so hard to choose which A-side I liked more though x.x

Getting into new songs, HOME for me reminds me of some of the B-sides of the era since it’s Joe at his basic rock standards.  Yes, he’s also at his normal range in his vocals but that’s cool.  Then we get into the chorus and it just falls flat because it feels like there needed to be more guitars and the like.  It’s simple, but it can be catchy at various points!

While it isn’t a dual-titled with two different songs going on, Futari de Hitori kind of continues to show more of a rocker side to Joe’s music and I’m kind of liking this.  I think the only thing that brings the song is the kind of draggy chorus, but it’s still nothing to worry about since the rest of the song is great for me.

First off, I have no idea who this Y0ko Yazawa is, but whatever.  ANIMAL is surprisingly a darker song for Joe to do because there’s yelling, low vocals and a pretty powerful chorus.  I like the chorus for sure…oh wait…Yoko is a gal?!?  I don’t know why but I was amused when Joe introduces her before her section of the song because she really puts that angst to use.  I ended up really liking this song, just because it just had a lot of power to it and it was great to hear a collaborator do just as good.

After quite a bit of rock songs, I’m kind of surprised that Kimi Gokoro is back to the guitar/synth stuff but with more focus on the synths.  Unfortunately, Joe is under quite a bit of auto-tune and it’s kind of annoying that most of the problems occured in the verses since it was just all over the place.  I did love the chorus though so it made up for the meh-ness of the verses.  Different and kind of random on the album, but still good.

Huh?  How can there be an album version of a song that hasn’t been released in his main discography?  I’m pretty sure it’s on a VA or something.  LIGHTS actually sounds pretty good since it’s like an anime-ish song but at the same time brings out great vocals from Joe.  I mean yeah on the album it kind of pales of the originality, but it’s simple and good enough for me.

Likewise with “Kaze no Gotoku”, I don’t really hear the differences between the album and single versions of the song.  I really liked Joe’s quick singing in the song and the uber catchy chorus as well.  Still it’s one of the better songs I’ve heard from him ever since starting with his music.

If anyone paid attention, Joe Inoue struck gold with CLOSER, which was his 2nd single and a tie-in for the Naruto series.  Given I never listened to the original, CLOSER in English was a smart choice and I think this song definitely fits the Naruto shtick because there’s a mix of rock and synths that just flow seamlessly together.  It’s catchy, but to me it still kind of under the singles of this era.

Ending the album, Hello Hello Goodbye is the only song that has no guitars present, so that means it’s synth and auto-tune loves.  Though being in both languages, it’s like really an odd and kind of cheesy song to listen because of basically most of Joe’s English lines.  It feels long for being just 2:20, but c’mon really this song kind of is yikes on a stick.

As DOS ANGELES is Joe’s third album, I felt that it was oddly way too short for me with just 10 tracks, but more like 9 because of the opener and closer songs being so sh0rt.  Still it’s not that bad, but maybe a tad safe for him…I do like his vocals alot and I can see him pulling a great album eventually. 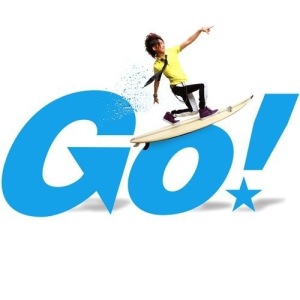 Being used to Joe’s next single “Kaze no Gotoku”, I was wondering what he released before the single and I’m surprised that I ended up enjoying GO★ a whole lot because of its upbeat nature and catchy lyrics and fun vibe.  I really liked Joe’s interest in the song since it gave the song even more of a reason for me to like it.  It’s definitely better than “Kaze no Gotoku” for sure.

Then again I wasn’t exactly expecting WHAT IS YOUR NAME? to be somewhat of a pop/synth/rock/jazz fusion of a song, but somehow…this song kind of passed over my head because I’m not used to Joe’s weird stuff going on here like his whispering, his real deep man voice and high voice.  It’s just a bit too much for just one song.  It’s definitely a hard song to get used to.

As for the 2nd B-side, Jinkoueisei takes the low road here and is one of Joe’s more serious songs in the era and his smoky vocals really played well here.  Even when the chorus explodes and brings his vocals to a much rougher state, it’s still pretty damn strong of a song.  Great B-side!

For being the first of the “DOS ANGELES” era, GO★ is surprisingly better than the next single which is not surprising for me.  I think the main song is a good song if you wanna be happy and such and need that extra boost.  Jinkoueisei is more for the people that enjoy his more serious-sounding songs which also did very well for itself.  WHAT IS YOUR NAME? though is just a little strange for me since Joe is utilizing different vocal styles for this one, but the music is relaxing though lmao. 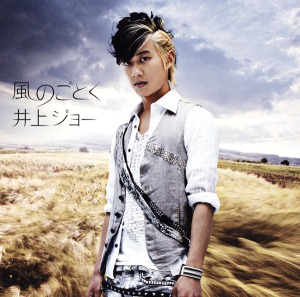 So since this is my first Joe Inoue song and better yet heard it from Gintama, Kaze no Gotoku is so vocally strange for me.  I wasn’t expecting his vocals to sound so weird like they do in the verses, but the chorus was more to what I imagined his vocals would be like.  As for the song, it’s rockin’ and I liked that a lot since it has that Anime-ish feel to it.  Besdies, the weird verses, this song is pretty good.

Now this is even more of what I was expecting for Joe.  I mean his vocals here are like a few other J-rockers…and that’s not entirely bad since it’s actually clearer for me.  It is a tad slower than the A-side, but a little more longer-lasting for me.  I know there was a lot of English in the previous song, and there’s a bit here too and his English for the most part is pretty good so that’s another point for him.

I think Joe in this song sounds pretty awesome, but that’s because this song has equal amounts rock and synth together and mix in with CLEAR English lines, I was mostly impressed with this song.  Well it seems the verse is only English and the bridge to chorus is a mix of both languages.  There’s just something about his vocals that sound really great.  Awesome B-side.

Since this is actually the second single of Joe’s third era, Kaze no Gotoku is a great place to start off with him for sure.  I mean yeah, Kaze no Gotoku isn’t his normal sound in vocalland, but it’s great as Gintama’s 2nd opening!  I do think Sekai no Kakera and BALLERINA were more closer to being great A-sides since both showed off his skills quite nicely.  I’m so intrigued now lol.