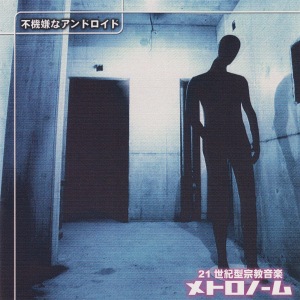 We begin the mini-album with oddly enough a church choir ahhhing about until it’s cut short and is replaced with a more stranger synth melody and percussion is added as well.  It’s really strange, but I’m hearing like an Indian kind of singing and a robotic voice in the middle as well.  This is just very odd and yet enticing at the same time….hmmm  Oh, the robotic voice is naming the members of the group (well at the time).

Our title comes up first and it’s very futuristic and Sharaku’s voice seems very overpowered by the synths, luckily things get fixed up at the chorus because he really gets loud and the group is yelling the chorus.  I was really surprised in the after chorus because it got really melodic and that was strange, but awesome.  The swooping synths and the funky bass line, was just perfect for this kind of song,  Great leading track in my opinion.

Aquarium actually starts sounding pretty chill at first, but when the band comes in, the song becomes more harder than the last track.  Sharaku’s vocals are so much louder here, but I kind of felt it was missing some power, but I also noticed Sharaku was toning it down in the bridge….weird.  The strings in the chorus was pretty cool, and the synth being a part of it was cool after it.  Maybe I’ll grow to like it.

Gimmicks has by far the oddest opening and basically overall sound to it.  It begins with what I think is a combination of xylophone and synth together and the song is a lot lighter on the rock sound because Sharaku’s vocals are oddly higher than normal sounding like a child…>>  Then all of a sudden things get really hardcore when the music shifts to a darker sound and Sharaku growls out ~Gimmicks~.  It’s funny because I really enjoyed the tracks bipolar-ness and represents the band actually quite well.

The best way to really describe our next track is kind of difficult.  It sounds like it came from a horror film because of the synth-like organ playing the chords like it was one.  Sharaku is back to a more deeper sound and then things get really difficult to follow because they are singing way fast.  The worst thing though was the constant creaking…I was like really annoyed that it was taking the experience.  It’s even there when the band stop playing on and off….I was like UGHHHH.

I found Yume de Aetara interesting because of it’s Bhangra-like opening into the track.  It disappears once it really opens up, but this track is pretty hard especially after the last few tracks.  There’s hints continuing to show off the Bhangra style and Sharaku’s vocals sounds right within the song.  It’s good that they were sounding varied here because it honestly worked.

Papaparanoia is so hectic.  I’m up for hectic songs, but this was just messy and didn’t make any sense on my end.  Sharaku’s staccatto singing did not help as well as the unneeded indian call that was really high-pitched….that really bothered me.  There’s not much else that could be said about it, so I’ll jsut say it’s a pretty bad song.

For being a bonus track, I didn’t see why it needed to be considered that.  It’s more like it shouldn’t have been really included.  The song’s arrangement is still pretty hectic, but not with heavy rock like our last track.  It still doesn’t make too much sense, but at least there’s somewhat of a melody in it, so it makes it so much better than “Papaparanoia”  Actually, sometimes when Sharaku’s monotone singing reminded me of miyavi’s same style in “POP is Dead”

metronome’s second mini-album definitly was so much more better than their first.  It was their first mini to really include the synths in the forefront of their songs and it worked it most cases.  There were still a few mishaps that went on mostly keeping the songs sounding together.  Maybe their full-fledged debut album will sound so much more better ^)^

Starting off is this radical track.  For being a V-kei band, this is way out of the ordinary because of the major focus on synths and futuristic sounds.  The full band isn’t present as there’s a females voice talking.  I’m guessing it’s more of a introduction in the this mini-album.  It doesn’t exactly change mood, but it’s a good opening nonetheless.

Hako wo Meguru Bouken starts fast and then slows down into combination of synths and strings and some other stuff.  It really sounds cool with the guitar stuff in the background.  Sharaku is filtered heavily until the chorus where we finally hear his voice.  Sometimes I think he’s wailing to the music and other times the wailing fits with the music.  Pretty cool track.

Even faster than the previous track, PUCHI Tenpenchi is also the shortest track, but it sounds pretty cool.  Sharaku sounds a tad better and sounds like he’s having fun with this track.  Other than that, there isn’t much to talk bout here.

I really don’t know why, but when I hear this song I think of Sonic the Hedgehog…Anyway once again Sharaku is filtered heavily and to me this doesn’t work because the music is also slower in tempo.  Ehhh, other than that this song is just fillerish to me.

All right!  Now this is a track worth talking about.  The song sounds Arabian almost, but features the least amount of synths.  It’s weird that the song sounds live almost, but it doesn’t bother me.  The music is harpischord while the band plays along.  It’s the first time hearing someone other than Sharaku singing and they sound great.  Cool track.

The only track to have a PV to it.  It starts with a conversation leading into a crazy opening and then leading into the track.  Sharaku sings a little bit and the sound opens up further which was awesome.  The problem Sharaku is pushing his vocals hard.  It’s kind of hard to listen to the song with him doing this odd tactic.

metronome’s debut isn’t stellar, but it’s enough to pick a few songs to listen through.  Sharaku is one strange vocalist and I think that’s what sets them apart from other V-kei bands.