So panache! opens their album with a short introduction with infinity spiral and OMG this would’ve made a great full song because the song is pretty electro and has a great sense of momentum.  It’s a bit sudden of an ending, but this track is pretty exciting though would’ve loved this with lyrical content.

Of course it moves into the trio’s debut single.  I still am not the biggest fan of this song because it sounds amateurish with the amount of auto-tune that’s present.  There’s just this disconnect I have with this song and it’s just one that I always seem to pass over because it’s just icky to listen to.

Going into some new tracks, I was surprised to hear Prism have a more idol-pop groove to it compared to “Kirameki Miraizu” though I have to question the singers because they are way pitchy…especially the chorus where those notes are super high!  I do enjoy the arrangement as it’s less synthetic and awkward.  So this was a pretty neat song and much better than their debut.

Moving onto our title track, Reincarnation actually sounds like what the album cover was showing off which is pretty cool.  I am happy that the trio toned down their voices a bit, but they do seem like their voices are still slighlty auto-tuned.  It’s pretty different and the light oriental feel adds a nice layer of originality too.  It is a bit slower than the previous songs, but it sounds pretty good otherwise!

The next song up is actually the B-side from “Sky Believe”.  Like I said on the single review, Unison was a strange song to hear, but it actually works coming after “Reincarnation”.  The whole idol/R&B mixed with their synth style just felt good and add even more that the ladies together sound REALLY good in this track left a good mark on me.  It’s definitely one of the better songs from the album.

Spring Love sounds oddly refreshing from the start with the sparkly synths and happy atmosphere.  The group of course returns to their heavy amount of auto-tune on their voices and like “Kirameki Miraizu” it sounds a bit harsh to my ears and the chorus is just a bit messy.  Actually the way I feel is VERY similar to how I feel about the aforementioned track…

Then we get into the cover song which was a VOCALOID cover from their “Kirameki Miraizu” single.  Now there’s not much to say here because it’s a repeated offense with the overload on auto-tune.  The only thing that made it stand out was the nice addition of piano…BUT…now it doesn’t even matter.  It’s just a meh song overall!

Then we move into their 2nd A-side but it’s just a really interesting segue into it since this song was such an upgrade over their debut single.  The arrangement reminds me of “infinity spiral” with being more beat progressive and easier to enjoy.  The vocals are OK, but nothing too special, but it worked for this track at least.  Not bad!

Now the rest of the album is new songs which is fortunate!  Actually I would go and say this is the album’s best song!  The arrangement is engaging and has a pretty cool 80’s sound.  Add on that the trio is singing in a deeper tone for most of the song is also welcomed at this point!  Plus this was showing the group can really put out amazing songs.  Best of the album!

For such a title, I was expecting a super sugary song and Colorful Tart started off that way with squeaky vocals.  Though they don’t seem as bloody annoying like they are in other songs on the album.  It’s pretty sugary though so it’s a hard song to get through, but honestly I didn’t have as many problems here so it’s kind of the middle of the ground.

Most editions of the album ends off with Precious Memories.  Unsurprisingly, the track is a ballad so they chose to end off on a good note.  I also enjoy that there’s nothing synthetic about the song and the vocals seem like robotic compared to the rest of the album.  I do like the arrangement a lot since it sounds so J-pop.  Though I will say the girls should keep away from hitting high notes like they do.  It’s ridiculously high and makes me wince.  Odd song…but it’s OK.

So on regular editions, we get two bonus tracks in remixes of the A-sides.  The first of Sky Believe drives the song even more as an electro track which is always good.  It’s pretty good overall and not too much has changed, but its still good nonetheless.

I wasn’t sure how to feel with Kirameki Miraizu getting a remix but boy do I love the intro with the strings and piano!  Though once they start singing, I’m disappointed with the STILL overly auto-tuned vocals.  Then it just kinds of dozes me out…just not so good after the intro sadly.

So having to do panache’s debut album, I wasn’t sure what I was expecting with Reincarnation, but it’s kind of a mediocre album.  There wasn’t a whole lot memorable with this, though some of the new tracks were pretty interesting.  Sadly, this would be the trio’s final release as shortly after the album’s release,  panache! disbanded (Kuroneko found a different job supposedly).  I mean it’s depressing since they could’ve held auditions (if SONY cared enough, but clearly not).  Well…they could’ve gone farther so hey whatever lol. 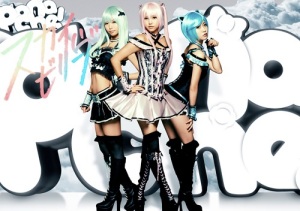 For being in more of edgy costumes, I kind of thought the group was going to releasing something more epic than Sky Believe, but this kind of ethereal technopop song also works and kind of makes sense with the title of the track.  They did tone down the amount of auto-tune that’s present, but it’s still there…still compared to “Kirameki Miraizu”, this is actually a decent A-side!

The B-side of the single, Unison is kind a strange combination of their synths and idol tone with an R&B track and it was a bit of a stretch to combine.  The vocal filters are a bit more apparent, but they seem to make the trio actually have different tones against each other which is a nice touch.  When they sing in unison (OHHHHH)…they sound really good which is a bit unheard of in idol groups (but I’m sure it’s help from the computers).  Still this isn’t a bad song, but something you gotta get used to.

Whoever produced this single had a clear view of panache! and their sound and I really was surprised by it all!  Sky Believe was a much better single than “Kirameki Miraizu” on all counts for being more clean and the vocals treated MUCH better.  I can’t wait to review “Reincarnation” and see what their album holds!

As the debut for panache!, Kirameki Miraizu is interesting because it the group is of 3 cosplayers.  I was surprised to hear so much auto-tune in the girls voices.  Actually, their music and overall sound of the track reminds me of a harsher ClariS actually.  I wonder how the song would’ve sounded like if there wasn’t so much auto-tune present tbh.  It’s cute, but I think it would’ve been better had it not been so damn hard to tell the difference between the three ladies’ vocals.

I didn’t expect their B-side to be a cover of a rather well-known VOCOLOID song though I’m not sure why it got a remix tab on it.  You’re essemtially getting more of the same from the previous track here so get ready for more assaults of auto-tune on your ears.  The arrangement though is cute and I love the addition of piano in midst of the synths.

For a debut, panache! isn’t totally special but they are somewhat unique in the whole three cosplayers forming a group together.  Their debut single, Kirameki Miraizu isn’t terrible but there’s definitely problems here.  The overuse of auto-tune is probably the biggest flaw here since I couldn’t tell who was singing what through both tracks.  Happy Synthesizer is a good cover though and I like it a bit more than the original strangely enough.  I’m curious to see what they’ll do next as a group!