Finally, we get out of the ballads and into something different.  Problem is is that different is now a cheesy winter pop song.  I mean OK, give her credit, she sounds pretty great and the arrangement is fun and poppy with some disco thrown in but the way it just flowed and the way Steph was singing it made it seems kiddy-like.  Still it doesn’t beat that one lyric parody that was on YouTube where it seemed like she was high as a kite and bitchy XD  Best thing ever right there!

Carrying on, Life is actually more rockin’ kind of like some of the stuff found on her debut single.  Life is so girl rock and although Stephanie has a great voice, that chorus did not need that screaming…It reminds me of Kylee’s music, but since Stephanie came first I can’t really say anything else haha.  I laughed at when the music stops for the piano melody…funny stuffs.

Opening the exact same way like the original with that uber high whistle note segment, Kimi ga Iru Kagiri got stripped of everything that was in the original and replaced with just an acoustic guitar and some percussion.  While I love the orchestral touch of the original, the acoustic took it to a rather smooth place.  I think it felt a little more honest and hear a little more of Stephanie but damn girl yelling ur song like that is not gonna get you anywhere.

Stephanie’s 3rd single did manage to get her out of the ballad rut I felt she was in (even though they were good).  It was nice but did Winter Gold have to be so cheesy?  By the way yelling in the songs is not really good for you.  Still the single can be really enjoyable and is better than “Kimi ga Iru Kagiri” tbh.

Thank god she doesn’t begin this single with a whistle note this time.  Even though because of you is basically a refined version of “Kimi ga Iru Kagiri”, it’s still a pretty soothing track and it does have a certain Disney ballad quality about it.  She definitely does yell through the songs though, but I guess it makes it more epic???  Still it’s a better ballad than her debut.

While we know Stephanie isn’t one to stick to one style, To.Be.Me. is a bit more rock-oriented and I enjoyed how it began so loud and fast.  It’s not bad at all, just very different I guess.  I guess there isn’t much to really complain about because I like Stephanie singing rock songs more than ballads right now.

Stephanie decided to cover Michael Jackson’s  “Ben” and honestly, her voice definitely suits the song because of her powerful vocals and it works for me because she really pulled it off nicely with just a piano arrangement.  Really pretty song though being only 3 minutes.

Stephanie’s 2nd single really surprised me because it basically fixed the problems that were wrong in “Kimi ga Iru Kagiri” and vocally made the three songs just stand out really nicely.  I really liked her cover for Ben though, really pretty song. 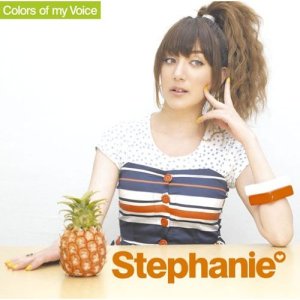 We begin Stephanies sophomore album with a soft pop track, Kotoba Nanka Iranai Hodo ni.  I guess I can easily say that she didn’t open up with those whistle notes like how “Kimi ga Iru Kagiri” opened up “Stephanie”.  She might come off as a little bit too stressed at the start but this is actually quite nice.  I really like the chorus though, that was pretty nice from her.  Nice opening track

Lulz at the recent problems Roma has been xD.  Anyway this was the track the kickstarted off this era and it’s interesting that she chose the duet over the solo version.  It’s a nice track to listen to because its of it’s more orchestral sound, but I just can’t get my head around to exactly like Roma’s voice…it just doesn’t sound appropriate especially with Stephanie’s nicer vocals.  She should’ve just stuck the solo version on.

She ended the era off with this A-side, FUTURE.  Interesting that it was the only upbeat A-side of the era and I quite liked it alot since the single’s release.  Stephanie sings pretty brightly and she sounds really good hear with the strings playing around mostly.  The song does sound a bit similar to “Winter Gold”, but otherwise it’s still pretty good as the leading, danceable A-side.

I was expecting something quite explosive from this track, was I wrong.  The song is actually something more like that acoustic pop song some artists like to do….y’know like Shion Tsuji or YUI.  It’s a bit darker which is what she needed and it sounds quite mysterious (for an acoustic track).  She should do more of these kind of tracks, LOVIN’ IT

Together was originally off the “Changin'” single as a B-side and sadly it carries that “Stephanie” sound that was sadly prevalent on the album.  Very laidback and somewhat cheesy.  It’s alright, but I think she should’ve left this on the single because right now, it doesn’t exactly fit the mold of this album.

I really love how she opened up Forever in her higher register and then it turns into this dance track which surprised me because she hasn’t done something like this before.  Another thing I noticed was that the song is mostly sung in English.  It might be lyrically cheesy, but the song does harken back to when this eurobeat was pretty popular and I quite like this track as well.  Surprising, but handled great.

Her second A-side comes by and it’s so much better than “Changin'” even though they basically are close enough in style to one another.  I really think this should be one of Stephanie’s epic ballads because it really is.  Stephanie’s really sounded great and this other girl SRM was just as good because they were together and sounding in synch.  A way better song that Hector Fierce’s.

KISSES also was a B-side, coming from “Pride’s” single and it actually fits on here better than “Together”.  It’s kind of like “Kindan no Knockout” in the way that it sounds darker than normal and it’s prolly from that bass synth.  It sounds pretty nice on the album IMO, it might come off as a bit disappointing, but this was nice.

Artists love using the orgel huh?  Well, Stephanie begins this track off with it and then coming in singing the opening line and she almost goes into whistle note mode, but luckily she keeps it tame here.  It’s a bit of a light acoustic pop track and oddly sounds nice after “KISSES”.  There’s also a guy singing a little bit with her in the bridge…that made me raise my eyebrows a little bit.  It’s not too bad, but I think it’s my least favorite of the new tracks.

Jeeze….another orchestral ballad.  At least she’s doing this alone finally, I’ll have to say she knows how to do these ballads really well because Stephanie just sounds like an angel here.  She does yell out a few notes here and there, but I think it’s for dramatic effect and I quite like it.  While we’re here, the lyrics are wow.  Even though she switches languages a few times, the English parts are nicely written and it doesn’t come out as horrible cheesy.  Another epic ballad? I think so.  She finally does some whistle notes at the end and brings the song to its ending.  Super nice.

I mean at first, I was like WTF….feat. fans?  What’s that supposed to mean?  Anyway, this song does sound a bit like “FUTURE” which is good for me because it’s upbeat and easily danceable.  The chorus was kind of cool with the falling notes, that was cool.  I love the echo addition in the middle, I thought that was an interesting addition.  Still what’s this fans thing about?  I mean I can see this song being used on a tour and have her “fans” sing with her.

I’ll be honest, I came to this album with a very negative outlook of what it was going to be like….and that cover….why Pineapples?  Anyways, this album basically blew me away especially since “Stephanie” was otherwise a really meh album.  She stepped up her game really well and I like all of the tracks except Changin’ well I like the solo version so, in this case I like the entire album.  Surprise, Surprise it’s another album I enjoyed fully! *RECOMMENDED

Oh what the hell? 0.o  That was an amazingly high note opening to this track.  It’s funny that it’s the only time you really hear her use that amazingly high note though.  Other than that, Kimi ga Iru Kagiri is your typical J-pop ballad which doesn’t exactly mean anything to me.  It’s nice, but it’s like mirroring how alan showed off her mountain notes in “Ashita e no Sanka”.  Both wanted to start off their careers on a high note (literally).  It’s alright for a ballad though.  Stephanie though does have a good voice on her though….hmm….

As a surprise, Stephanie decided to go rock on us for the first B-side and even though it’s like hearing Kylee singing, Stephanie doesn’t really have any problems with singing in this style and I kind of prefer this over “Kimi ga Iru Kagiri”.  It’s a pretty rad song in other words LOL

However, when Steph gets into the pop side of things, she kind of screws up royally.  It’s like super-duper cheesy and I rather not listen to Steph doing these kind of things.  The music is fine, it’s just her lines in English makes me shudder because of the corniness going on.  I liked her voice except the whole ~I’ll be your girl~ lines.  I guess it can be enjoyed, but in long intervals.  She’s definitly channeling Mariah Carey in this song, how funny is that?

Stephanie’s debut single was nice actually.  I was actually on ends to see if I liked her and the only track I really listened to was 3rd A-side, “Winter Gold”.  I think Stephanie can have a pretty good career, because I’m liking what I’m hearing so far