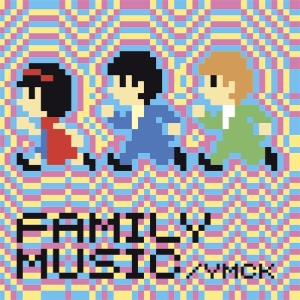 Hehe, OK so it’s a typical opening to an album, just covered in 8bit bleeps and bloops and then a voice announcing the group and album title.

Our first track, opens up like some kind of battle sequence and we get into the groovy 8bit sounds and Midori singing along.  I love the fact it’s so out of the world and here she is singing like it’s nothing.  I do like her adlibbing though it’s just too cute and worked for me.

Being a bit shorter than the previous song, Pastel Colored Candy is rather interesting as I hear some male vocals mixed in with Midori’s singing as well.  I love the bouncy beat that came with the song and when the 8bit gets a solo, it’s like wow lol.  I still can’t believe it’s as short as it is, but whatever it’s a pretty good track.

Why are the songs getting shorter?  Darling is a bit over 2 minutes and it’s rather nothing to write about since it’s a little more emptier of the 8bit sounds.  I do once again love Midori’s ad-libbing as it follows along with the melody.  Past that, nothing else to really say about this track.

I love the clumsy opening of POW*POW.  It’s got a feelgood sound to it, like walking down a path or something.  It’s giddy and the song is minimalistic on the 8bit except for the low 8bit sound and the solo section.  It does show the guys impressive work with the sound and I love it…made me happy for sure.

There’s a quick interlude before getting back into the songs.  The some voice from the beginning repeats the same he did there and let’s the music go on and it bridges well.

I don’t know who originally sang SOCOPOGOGO, but YMCK’s version is quite a strange tune and it has the oddest homage of the album.  It took a melody from Super Mario Bros. and made it minor and that made me laugh quite a bit and shows that the group shows off their humor with stuff like this.  Midori’s vocals here are interesting as they’re cutesy.

~This is a message~, ~Alpha Centauri~….What?  I’m not exactly keen on what the beginning is all about, but that stock vocals is strange and then you hear different vocals happening from that voice from the beginning and a guy’s voice and Midori.  The song sounds a bit fuller and richer in sound which gave it a better sound than most of the songs so far on the album.  I actually love this track alot.

9. Tetrominon -From Russia with Blocks-

Oh I see, using the sounds from Tetris to get by eh?  I have to say, Tetrominon is one of my favorite songs from YMCK as it cleverly uses other bleeps and bloops from somewhere else to make the song stand out.  I do have to say that I have a hard time hearing Midori’s more subdued vocals.  Still one of the cooler songs.

10. Does John Coltrane Dream of a Merry-go-round?

YMCK opens up their songs so awesomely and this is no exception.  It does sound different from their other tracks as it doesn’t sound as giddy at first to their other songs.  Once the opening finishes, the main track becomes bouncy and Midori’s vocals are a bit louder here and that’s good.  Though, I’m quickly bored after a while, but it’s because the arrangement doesn’t stray away long enough so it becomes rather repetitive.  It’s cool though because the lyrics and flow change.

Ooooo we get a song about colors?  I’m more used to the remix of this track that was done by RAM RIDER.  ~Do you know the colors?~.  It’s a rather smooth track considering with what they’re working with and this song is cute especially with the chorus that goes through the title.  It’s like Midori is saying ~Yellow, mazenta, seen, and blaaaa…???  It’s confusing but at least it’s understandable to what they’re saying.

The final song of the album, Your Quest is Over is quite fitting especially where it’s placed.  I really like how the ending tune sounds like something from Final Fantasy because of the darker chords of the 8bit.  Now Midori comes in and it seems this track is a ballad which…what?  8bit ballad? WTF!  After Midori finishes up this passage, the song gets giddy again…which throws the song off its hinges.  Alright, but the ending was just not needed.

YMCK’s debut is alright for a 8bit album (there aren’t many of these kind of groups in the first place).  FAMILY MUSIC is full of nostalgic themes and while their 8bit theme shouldn’t have been stretched 4 albums, it’s good to listen to these songs once in a while.  Midori isn’t an amazing singer, but if she gets a stronger voice and not all airy, I’m pretty sure it’d be good. 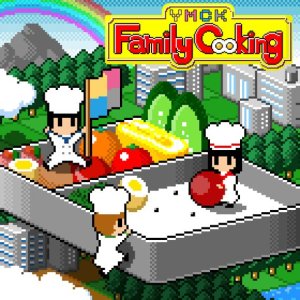 The standard opening to the album, it really sounds like Pokemon 8-bit which is quite scary.  That’s basically it, a short tune to begin our album, nothing too special.

A pretty heavy sound starts Karee Da yo! and we get our first taste of the vocals which are a surprisingly robotic, but that’s because of how they are distorted.  Midori does get covered by the music sometimes, but it’s oddly enjoyable. especially the fast parts of the song.

Then we get kind of jazzy for Salad Shabadaba.  Maybe it’s the awkward male sounds that make it seem so Katamari-like and that’s probably why this is one of the funnier tracks.  The 8-bit-ness just oozed cute and Midori sounds really good.  There’s a pretty cool solo section as well.  This is just crazy good.

Why does the beginning so so damn familiar?  Anyways, Mitsuboshi CHEF no Uta has a cool laidback sound that is rather refreshing, but it continues the whole game sound which is has the kind of rhythm that’s easy to hum to.  I think they could’ve left a few moments out but otherwise this was a nice track.  The solo moment was just so random and funny.

Definitly sounds like a pretty epic boss theme that opens up Gurume no Aitsu which is what made me initially call this the best track.  It’s got such a pretty cool groove and the melody of it is just crazy.  There’s just great moments in this song and at the same time if it had brass in it, it would make an awesome Jazz song.  How the song end is just so oddly typical rock songs end, but it’s the icing on the cake.

Yea…this song is just a little on the forgetful side of things.  I mean there’s already a nice calm song in “Mitsubachi CHEF no Uta” so this isn’t anything I haven’t heard already, but I guess it served its purpose as a filler track.

Another one of those meh tracks.  Once again it just felt to be another filler track with not much effort really put into it.  There’s some nice moments like the sound of either wind or rain.  Other than, just another forgetful song.

We finally get back into the interesting stuff with this one.  There’s quite a cute emotion and it’s just such an enjoyment and Midori was also being really cute as well, but not Momoi disgustingly cute.  Even though I’m getting a little bored with the 8-bit, it’s still enough to make me like it enough.

Finishing the album, is the song that just sounds like Perfume but with the obvious chiptune stuff.  I have no idea why, but the song sounds somewhat vacant and OMG I remember what the beginning melody sounds like, it sounds like “Inryoku”!  Luckily the rest of the song is different and fun and pretty sweet on Midori’s end.  Just a pretty cool song to end on.

YMCK’s 4th full album is pretty much 8-bit heaven and is so much more better than Momoi’s “FAMISON” series of albums.  Even though the tracks somewhat do become a little more stale as the album progressed, this is an album not to pass up and should try out.