I was wondering what Eiko would release returning to the music scene and all and Onkalo is quite like the stuff I’m used to from her.  She sounds really pretty in the song and with the arrangement being tame and atmospheric.  I like the horns in the song…kind of gives off this medieval-like feel as well.  Nice tune to hear from Eiko.

The B-side of the single is luckily not a choral version of “Onkalo”.  It’s more of a ballad though since it really is only piano and drums.  I’d think she’d do something a little more to make it opposite to the A-side but this song is kind of a bit of a bore.  It kind of reminds me of some 80’s track with the chords and sounds.

It’s been quite a long time since we’ve heard Eiko last (well not too long if you’re a big Eiko fan or I’ve Sound fan).  She did produce “5TEARS” but that wasn’t enough.  Onkalo was a pleasamt return to music, but at the same time it felt a little forgetful when compared to her other singles.  It’s a nice ballad but I don’t know.  Unison though was a bit strange but boring as well.  I don’t know…I hope her next single will be much better. 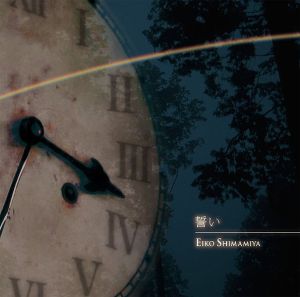 Hmmm, I didn’t know but Eiko does some interesting songs especially “Higurashi no Naku Koro ni” and “Verge”.  Chikai definitely fits into that kind of idea since it’s a mix of rock and the usual I’ve Sound touch which gives it an unusual style mixture.  Even though I know that this sound works with most of the I’ve artists, Eiko works best since her vocals match the feelings thrown out from it.  It’s a very sweet sound and oddly enough it’s like a slow version of MELL’s “kicks!”, but I don’t mind since it still comes off as nice.

While it was very surprising that Eiko’s mini-album, “Perfect World” only included the B-sides of both this and “Super scription of data”.  OXISOLS is definitely interesting of an A-side since it’s a ballad and yet very ethereal like a good portion of her old songs.  I like it since it shows off Eiko’s vocals more strongly with the minimal amount of music to cover it up.  Nice tune and good choice to include on “Perfect World”.

While Eiko Shimamiya is on hiatus for the time being, Chikai begins the “Perfect World” era quite nicely even though it’s not what I expect from her.  Chikai might sound a little like some other songs, but Eiko’s vocals is what makes it stand out in a good way.  OXISOLS though is a pretty ballad and did better impressing me.  I know it’s hard to wish this bluntly, but I kind of hope she makes more songs like “juggernaut” or something LOL.